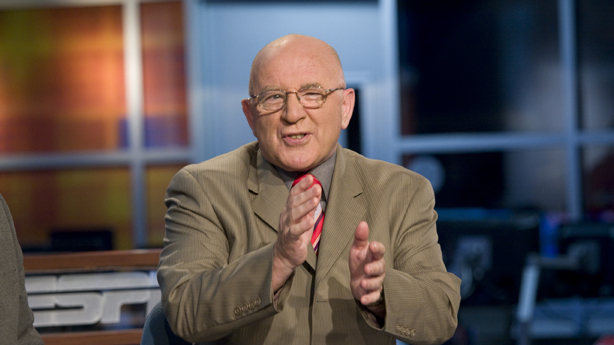 Yonkers, NY – Tommy Smyth, the man known for his signature line “the auld onion bag,” is returning to live sports commentary when he covers the NISA Independent Cup match between Lansdowne Yonkers FC and Newtown Pride FC. Smyth happens to be the Honorary President of the Lansdowne Bhoys, and had always expressed his interest in being an announcer for the club. He gave his debut run at the penultimate regular season match of the Eastern Premier Soccer League, when Lansdowne clinched the regular season championship at St. John’s. Players who grew up listening to him on TV and radio are excited to have him commentate on their match. “I remember listening to his commentary on the Champions League when I was a kid. It’s a massive honor to have him commentate on matches that I actually will be playing in,” remarked Lansdowne defender Sean Reilly.

Smyth, a gentleman originally from Louth, is known among the Irish-American community for being an announcer during the Annual NYC St. Patrick’s Day Parade coverage. However he is most famous across North America and in the broader world of soccer for his career as a sports analyst. He moved to the United States in the 1960’s, played professional soccer in the North American Soccer League, before shifting to a career in sports media. His biggest highlights have been on his 24 year stint with ESPN, where he had covered numerous matches for UEFA Champions League, Euro 2008, and several FIFA World Cups. He was part of the first ever commentary team for the NY/NJ Metrostars, who he commentated for from 1996 to 2002. He was most recently the local broadcast commentator for the Philadelphia Union. Smyth currently hosts a show on SiriusXM satellite radio called “The Grumpy Pundits.”

Lansdowne Yonkers FC, who are currently on a campaign for 4 major titles this summer, are going to need all the star power they can get. That includes a star in the press box of the likes of Tommy Smyth. You can tune into the match on Saturday at 7PM on the Eleven Sports App (formerly known as MyCujoo).