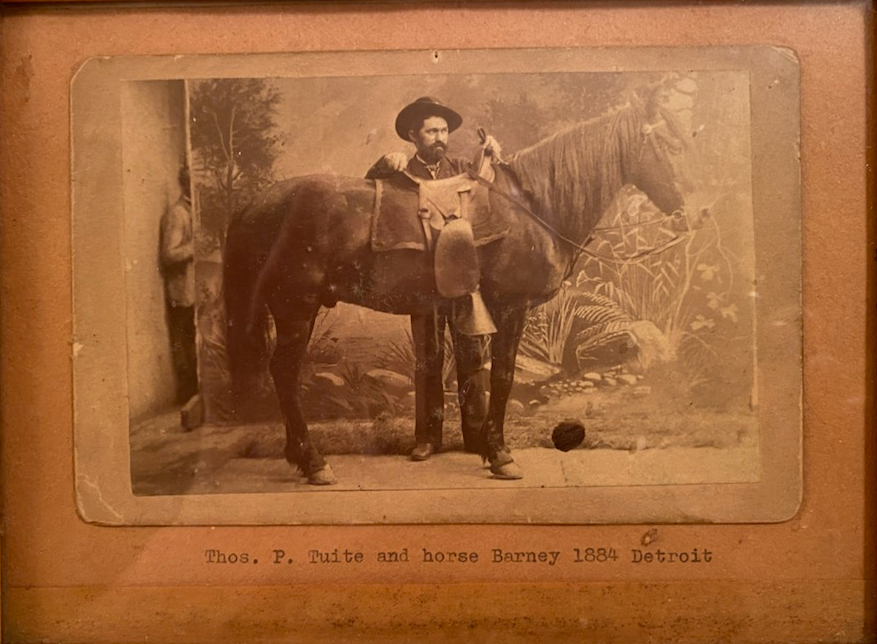 The most prominent member of the Star Spangled Banner Association was Thomas Tuite, who served as its General-Secretary.  Born in Ohio ca.1849, Tuite moved to Detroit at a young age where he joined the Detroit Fire Department upon its organization in 1860 as a torch boy.  Three years later he ran away from home to join the Union Army, with whom he saw action at Gettysburg and then served during the New York Draft Riots.  The excessive marching and drilling at such a young age resulted in him becoming permanently lame, and as a result was denied the ability to re-enlist with the Army.  However, this did not stop him from travelling to Ireland to take part in the Fenian Rising of 1867.

The Fenian Brotherhood was the American side of the Irish Republican Brotherhood conspiracy to free Ireland by use of arms. The Fenians first organized in New York City, and, realizing that they needed a brother organization in Ireland, organized the Irish Republican Brotherhood in Dublin, on Saint Patrick’s Day, 1858.  They utilized the American Civil War as an opportunity for Irish and Irish-American men to become seasoned in the use of arms.  Their plan was for American expeditionary forces to sail to Ireland and join in an anticipated rebellion there, but unfortunately the plans fell apart and the Fenian Rising amounted to just infrequent skirmishes. However, the legacy of the Fenians was to be their resiliency in continuing to use any means at their disposal to push for Irish independence, primarily through the use of explosives. Tuite was disappointed in the failure of the revolutionary plans to materialize, but this did not discourage his conviction in Irish republicanism, staying active in the cause until his death.

After returning home from Ireland, he re-joined the Detroit Fire Department, becoming a decorated fireman and later a City Councilman. In the 1890s he served in the Spanish American War with his two sons, and during World War One – when he was 70 years old – he joined the FDNY Auxiliary to offset the shortage in manpower. What year he got involved with the Star Spangled Banner Association is unsure, but the earliest newspaper article mentioning his association with the group was published in 1908.

As a leader of the Star Spangled Banner Association, Tuite was not afraid to hold back in his criticisms of those who refrained from playing the anthem.  On multiple occasions he led walkouts of events that refused to play the full song, and at times threatened (and followed up on) physical violence in chambers if his motives were questioned.  In 1922, at one of many public hearings that Tuite advocated for the anthem at, he was faced with much scrutiny from anglophiles that derided the Star Spangled Banner as having originated from a British drinking song, and of Tuite’s intentions they claimed that, “the whole thing was a lot of Sinn Féin propaganda.” This excerpt of the article, “Punches Punctuate Hearing on History” from The New York Times makes for interesting reading:

The little gray-haired man landed a blow on Kinnicutt’s jaw with unexpected force, especially considering that he had to stand on tiptoe to deliver it, for his opponent is some three inches taller than six feet..

Thomas Tuite was not just a member but a leading officer in many organizations, including the Grand Army of the Republic, United Spanish War Veterans, and Clan na Gael.   Through his work with Clan na Gael he became close friends with The Gaelic American editor and fellow Fenian, John Devoy.  It is remarkable how, in addition to these civic duties, raising a family, as well as working and lecturing on Irish history, Tuite still found time to advocate for the national anthem for over 20 years.  During that time he faced criticisms from a myriad of sources, but stayed determined to his goal. Woodrow Wilson recognized the Star Spangled Banner as the official anthem of the armed forces in 1916, and after five unsuccessful attempts, Congress passed legislation that made the Star Spangled Banner the national anthem of the United States in 1931.

The next time you put your hand over your heart and sing our national anthem, remember Thomas Tuite and the lengths he went to to win our right to sing this song.

Full version of Star Spangled Banner is below – as Tuite would have wanted it presented:

(The third stanza particularly offended the British because it essentially called them cowardly, referenced the killing of their troops, and derided their government’s use of ‘hirelings’, which were mercenaries, and ‘slaves’ which were slaves fighting for the Colonial Marines in exchange for their freedom, as opposed to the Americans who fought for themselves. Some modern historians claim the song glorifies slavery – decide for yourself)

O say can you see, by the dawn’s early light,
What so proudly we hailed at the twilight’s last gleaming,
Whose broad stripes and bright stars through the perilous fight,
O’er the ramparts we watched, were so gallantly streaming?
And the rocket’s red glare, the bombs bursting in air,
Gave proof through the night that our flag was still there;
O say does that star-spangled banner yet wave
O’er the land of the free and the home of the brave?

On the shore dimly seen through the mists of the deep,
Where the foe’s haughty host in dread silence reposes,
What is that which the breeze, o’er the towering steep,
As it fitfully blows, half conceals, half discloses?
Now it catches the gleam of the morning’s first beam,
In full glory reflected now shines in the stream:
‘Tis the star-spangled banner, O long may it wave
O’er the land of the free and the home of the brave.

And where is that band who so vauntingly swore
That the havoc of war and the battle’s confusion,
A home and a country, should leave us no more?
Their blood has washed out their foul footsteps’ pollution.
No refuge could save the hireling and slave
From the terror of flight, or the gloom of the grave:
And the star-spangled banner in triumph doth wave,
O’er the land of the free and the home of the brave.

O thus be it ever, when freemen shall stand
Between their loved homes and the war’s desolation.
Blest with vict’ry and peace, may the Heav’n rescued land
Praise the Power that hath made and preserved us a nation!
Then conquer we must, when our cause it is just,
And this be our motto: ‘In God is our trust.’
And the star-spangled banner in triumph shall wave
O’er the land of the free and the home of the brave!

Produced with thanks to the Tuite family who kindly provided us with pictures and biographical materials.