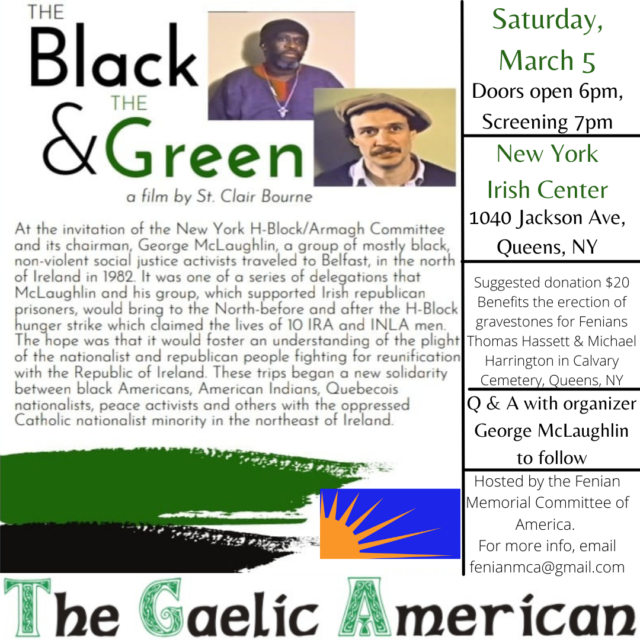 The British policy of criminalizing the Irish struggle for independence continued when the “criminalization” of Irish republican prisoners was launched on March 1, 1976. Prisoners had their “Special Category Status” (de facto political status) revoked by the Thatcher administration that day. The revocation of political status meant that Irish republican prisoners would be treated the same as ordinary criminals. The significance of this revocation was encapsulated in Francie Brolly’s “H-Block Song”:

”I’ll wear no convict’s uniform, nor meekly serve my time, so that Britain might brand Ireland’s fight eight-hundred years of crime.”

By criminalizing Irish republicans of the 1970s, the Thatcher administration was attempting to sever the legacy of Irish republicanism that had been passed through the generations since 1798. When Kieran Nugent was the first prisoner sentenced under this new legislation, he told the prison warders they would have to nail the criminal uniform to his back. Left with just a blanket, he became the first “blanketman,” and the “blanket protest” had begun.

Savage beatings and intrusive body searches left republican prisoners unable to use the toilet facilities, so the blanket protest soon escalated to the “dirty protest,” with prisoners forced to wipe their excrement on the walls to combat the spread of maggots. It should be noted here that a number of women prisoners in Armagh Jail also took part in this anti-criminalization protest, with an even greater physical challenge. Throughout all of this, Irish republicans “on the outside” were working both clandestinely and publicly lobbying their respective governments to encourage the British to bring an end to these conditions that Cardinal Ó Fiach compared to the “sewer pipes of Calcutta.” Among the Irish Diaspora to advocate for better conditions for Irish republican prisoners was Brooklyn-born George McLaughlin.

George McLaughlin headed the New York H-Block/Armagh Committee. Under his direction, protests were staged across New York for this umbrella organization that united all sorts of Irish societies – a major feat unto itself. George also travelled throughout the United States and to Ireland to represent the plight of the prisoners. Another song of the period laments the lack of assistance prisoners in the North got from the Dublin government when compared with the Diaspora:

”I’m 90 miles from Dublin town and it seems so far away, there’s more attention to our plight in the USA.”

After misleading concessions were granted at the conclusion of the 1980 hunger strike, a new hunger strike began on March 1, 1981, led by Bobby Sands. Sands was elected to the British Parliament while on the strike, clearly disproving Thatcher’s claim they were unpolitical criminals, but she did not relent. All told, seven IRA and three INLA prisoners died by hunger strike in the emotional spring and summer of 1981. In 1982, George McLaughlin led a group of black civil rights activists to the North of Ireland – “It was one of a series of delegations that McLaughlin and his group, which supported Irish republican prisoners, would bring to the North… The hope was that it would foster an understanding of the plight of the nationalist and republican people fighting for reunification with the Republic of Ireland. These trips initiated a new solidarity between black Americans, American Indians, Quebecois nationalists, peace activists and others with the oppressed Catholic nationalist minority in the northeast of Ireland.”

Soon after, George McLaughlin inaugurated a program bringing hundreds of the children and siblings of Irish republican prisoners to the United States for summer vacations away from the violence sparked annually by Orange Order parades. In recent years, McLaughlin has tracked down the graves of the Catalpa Six, several of whom were in unmarked graves scattered throughout the northeast. He also tracked the grave of Father Patrick McCabe, who facilitated the Catalpa expedition – McCabe happened to be buried at George’s wife Annie’s home parish in Minnesota. This journey of tracking down the graves of the Catalpa Fenians led George to establish the Fenian Memorial Committee of America. The last two graves of Catalpa escapees, Thomas Hassett and Michael Harrington, are in unmarked graves in Calvary Cemetery, Queens, NY. A film produced on McLaughlin’s trip with the black civil rights activists called “The Black & The Green” is to be shown at the NY Irish Center (1040 Jackson Ave, Queens, NY) on March 5, doors opening at 6pm, screening at 7pm, and a Q&A with McLaughlin to follow. The suggested donation is $20, to benefit the erection of gravestones for Hassett and Harrington. For more information, email fenianmca@gmail.com