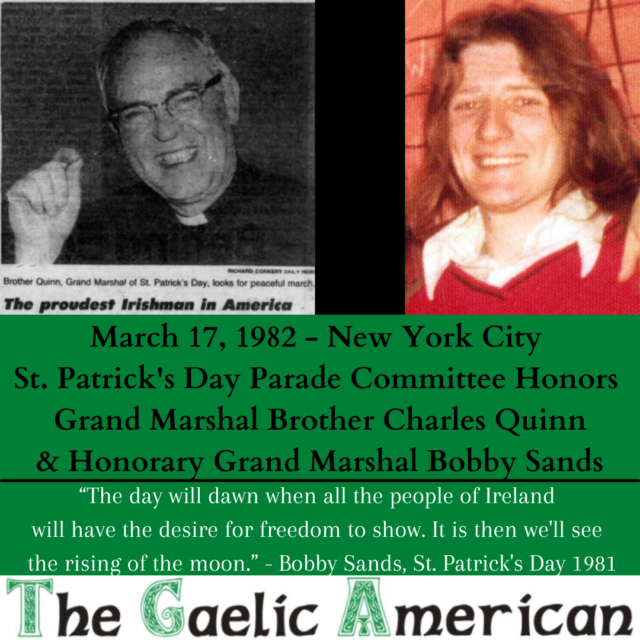 However, the emotional protests held every day of the 1981 hunger strike, from March 1 to October 3, throughout the country but particularly in New York outside the British Embassy, had left a deep resonance among the New York Irish. This emotional connection to the hunger strikers left the Parade Committee feeling that they owed a tribute to the hunger strikers, so they re-introduced the role of Honorary Grand Marshal, and posthumously named Bobby Sands – the vote was unanimous in favor by the 184 delegates representing 132 organizations. The Irish People described the move, “Such feelings reflect the tremendous increase in nationalist awareness prevailing throughout the Irish-American community as a result of the hunger strikers’ deaths.”

Bobby Sands was the first Volunteer to die on hunger strike to regain political status in 1981, after 66 days. While on hunger strike Sands was elected to British Parliament, disproving Margaret Thatcher’s claims that Irish Republicans were criminals and not political. Despite this, nine more IRA/INLA prisoners would perish in that strike, which lasted a staggering 214 days. In his time in prison, Bobby Sands wrote many poems and songs which were smuggled out of the prison, notable among them are “Back Home in Derry,” “Rhythm of Time,” and “Sad Song for Susan.” In prison he learned the Irish language and taught it to his comrades, who weaponized it when communicating in front of the prison staff. It was a great feat of teaching Irish people their native tongue in dire conditions.

Three-thousand miles away from the H-Block Prison, Brother Charles Quinn was also teaching the Irish language, in New Rochelle, NY. Quinn was born in Massachusetts but moved to Clare as a boy during the Spanish Flu pandemic, returning to America in 1949. While a full-time professor at Iona College with administrative and clerical duties, he would have students join him on his lunch hour to learn the language. At Iona and beyond he was well-respected by all who knew him. He served on the New Rochelle Aeriocht Committee, which was a celebration of Irish music, language, and dance, dedicated to the rebels of 1916. In 1966, to commemorate the 50th anniversary of the Easter Rising, Brother Quinn led a committee of Gaelic League members to have the first Irish-language mass in America. A former student described him as being a “firm disciple of Padraig Pearse,” whose advice was consistently sought by Irish Republicans in America throughout The Troubles. Quinn was also a moderator of the award-winning Iona College Pipe Band, and a member of the Ancient Order of Hibernians. Brother Quinn was named the Grand Marshal of New York’s 1982 St. Patrick’s Day Parade.

Always humble, Brother Quinn described his appointment as Grand Marshal as an honor representative of Iona College and the order of Irish Christian Brothers. Based on his activism and his belief in a united Ireland, we can safely assume Brother Quinn was proud to share the honors of the day with Bobby Sands. One of the Aides to the Grand Marshal that day was Patrick Mullin, a member of NORAID and President of AOH Division 35, who was on trial for conspiring to send weapons to the IRA.

For the first 17 days of his hunger strike, Bobby Sands kept a diary which allows readers to see the thoughts and experiences of one of Ireland’s greatest patriots. A quote from the entry for St. Patrick’s Day 1981 reads, “The day will dawn when all the people of Ireland will have the desire for freedom to show. It is then we’ll see the rising of the moon.”