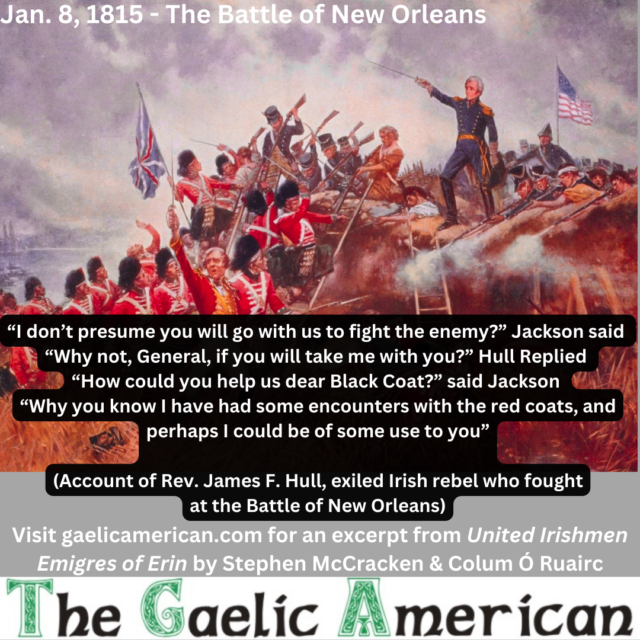 On January 8th, 1815, though the “War of 1812 was over, word had not reached the British and American troops in the Southern United States. Rallying ministers, slaves, pirates, and every able-bodied man he could find, Andrew Jackson led them to face the vastly superior British Army, who had recently defeated Napoleon at Waterloo. Jackson and his troops proceeded to rout the British, taking out their leaders and over 2,000 troops, compared to the American loss of about 70 troops.

The following is an excerpt from “United Irishmen, United Emigres” by Stephen McCracken and Colum Ó Ruairc – link to purchase the link is below.

James F. Hull was the son of the Rev. James Hull originally from Limavady, Co. Derry, who had been a much-respected minister who had preached in Tyrone and later at Ballyvaron, near Bangor in Co. Down. He had also served as Moderator of the 1769 Synod. James Hull Jr was born in Bangor in 1776 and eventually attended the University of Glasgow, following his father’s footsteps in theology. Upon returning to Ireland, Hull was licenced by the Presbytery to preach.  From its conception, Rev. Hull had been associated with the United Irish movement and was a close associate of Presbyterian probationer, David Bailie Warden. On 7 June 1798, when Henry Joy McCracken called out the Army of Ulster, Hull and Warden made their way to the summit of Scrabo Mountain, outside Newtownards. This was where the United Irishmen of north Down were to assemble and prepare for insurgency. When the turn out did not manifest, Hull attempted to rally those associated with the United Irish cause. After the Down Rebellion was crushed, a bounty of £50 was placed upon the apprehension of Rev. James Hull. He escaped both shackle and informer and immediately fled to the United States.

Hull settled in Baltimore, where the Rev. John Glendy of Maghera had established himself after also fleeing from Ireland. After a short period, Hull and his family relocated to the southern states, embracing new paths in the towns of Augusta and New Orleans. Having settled in New Orleans, Hull officiated as a Presbyterian Minister and his popularity saw him being pressed by the Episcopalian Church to also preach to them. In January 1815, the British and American armies clashed in the Battle of New Orleans, a battle which interestingly saw former French General, Jean Humbert serve with the U.S. Army, having left France during the rise of Bonaparte. Hull had also volunteered his services upon greeting General Andrew Jackson who apparently stated:

“I don’t presume you will go with us to fight the enemy?” Jackson said

“Why not, General, if you will take me with you?” Hull Replied

“How could you help us dear Black Coat?” said Jackson

“Why you know I have had some encounters with the red coats, and perhaps I could be of some use to you”

Hull was ordained in New Orleans a year later and ministered until his death 1833, carving out a career of bonding some of the various churches of New Orleans together.

James’s brother – HULL, Thomas – Son of Rev James Hull, Thomas was A United Irishmen Leader from Limavady in Co L Derry. Thomas is sentenced by Lord Cavan at a court Martial in Limavady after the failed Limavady rising. He was sentenced to serve the British abroad, principally in the West Indies.

Hull’s story will be included in a United Irish tour of the “Ards” hosted by Reclaim the Enlightenment in Summer 2023 – follow their Facebook page for updates.

The book can be ordered from – https://www.lulu.com/shop/colum-o-ruairc-and-stephen-mccracken/united-irishmen-emigres-of-erin/paperback/product-gprzmp.html?q=united+irishmen&page=1&pageSize=4

Reproduced with thanks to Stephen McCracken and Colum Ó Ruairc.

This is the first exercise of its kind in attempting to compile the names and backgrounds of exiles and fugitives of the 1798 Rebellion from across Ireland. It is also the first publication by McCracken and Ó Ruairc in such a partnership. This work was compiled during the lockdowns of 2020-21 without any state archival assistance, relying heavily on county histories, 1798 publications, online newspaper subscriptions and applying genealogical techniques to delve deeper into the lives of these individuals. Colum Ó Ruairc hails from south Co. Wicklow. Having a deep interested in the 1798-1803 period since his childhood, he carried out a licensed non-intrusive metal detection at Vinegar Hill in early 2009 for his Applied Archaeology under-graduate thesis. Spending several years in Australia, he returned to Ireland and established the 1798 Rebellion Casualty Database, with the intention of recording as many casualties of the 1798-1803 period available. This will be a hopeful publication for the future.

Stephen McCracken is originally from outside Limavady and now resides in Antrim town. After writing and researching the 1798 Battle of Antrim he has partnered with Colum to produce this book. He is continually researching and often publishes historical pieces in the local news papers.

From the foundation of the United Irishmen in 1791 Belfast the Government led a crackdown against its members. It soon went underground and membership increased. As a result this seen the movement of people away from the shores of Ireland to America, France and other parts of the world. The United Irishmen rebellion escalated which led to numerous Irishmen to flee from Ireland or indeed were banished.