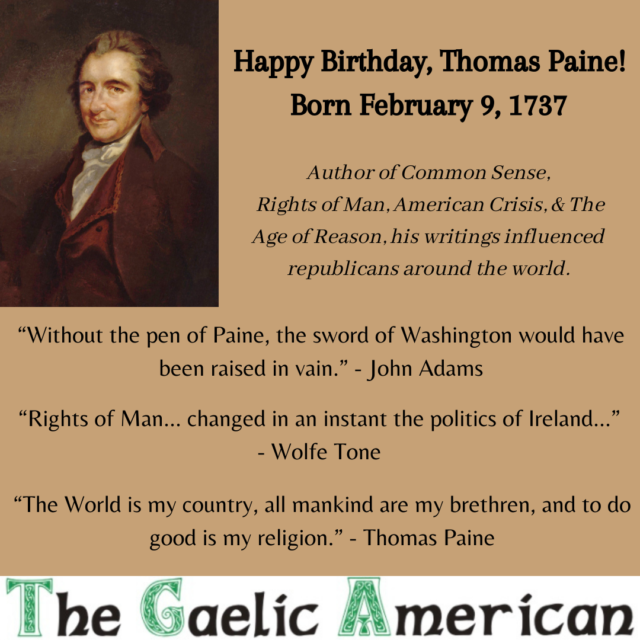 Thomas Paine was born on February 9, 1737 in Thetford, England. The son of a corset-maker, he worked as an excise officer in Sussex, in a town historically associated with anti-monarchical and pro-republican sentiment. In an effort to obtain better wages for he and his fellow excise workers, he tried his hand at writing a political pamphlet entitled The Case of the Officers of Excise in 1772. In London a couple years later, the Commissioner of Excise introduced Paine to Benjamin Franklin, who encouraged Paine to move to the American colonies, which he did just two months later.

In America Paine took up writing professionally, and let his political views be known immediately. At a time when complete separation from the United Kingdom was not a widely popular idea, Thomas Paine was a tireless advocate of “American liberty.” In his famous pamphlet Common Sense he ridiculed the idea of monarchy and questioned the supposed motives of the “mother country” that was mistreating the colonies and stifling their self-determination. Most importantly, he contextualized these ideas of liberty and independence in plain English so that it could be understood by the masses.

During the Revolutionary War his service continued – on Christmas Night, 1776, when morale was low among the troops, George Washington had his troops read the latest pamphlet by Thomas Paine, entitled American Crisis. It was incredibly inspirational for the troops as they made their way across the Delaware River where they found success at the Battle of Trenton. An excerpt reads:

“These are the times that try men’s souls. The summer soldier and the sunshine patriot will, in this crisis, shrink from the service of their country; but he that stands it now, deserves the love and thanks of man and woman. Tyranny, like hell, is not easily conquered; yet we have this consolation with us, that the harder the conflict, the more glorious the triumph.”

The Rights of Man

After the American Revolution, Thomas Paine’s revolutionary fervor did not wane. The French Revolution, begun in 1789 with the overthrow of the monarchy, was ridiculed by British MP Edmund Burke. Paine’s famous reply to Burke defending the French Revolution was entitled Rights of Man. Printed in 1791, it proved quickly popular in Ireland, where it sold a record number of copies. It was dubbed “the Quran of Belfast.” Wolfe Tone, a leader of the United Irishmen, commented that “Rights of Man… changed in an instant the politics of Ireland…” having the effect that the country was divided into two groups, the aristocrats and the democrats, with Rights of Man the test of everyone’s political creed.

The crux of Rights of Man was the right of the people to revolt against unjust government. It also ridiculed the idea that anyone could rule by divine right. Ideas like these were not favorably looked upon by the establishment.

The Society of United Irishmen was formed as a parliamentary reform-minded group in the fall of 1791, with Paine named an honorary member. The popularity of Rights of Man among working-class labor circles was causing trouble in England for Prime Minister Pitt, and Paine’s treasonous association with the Irish rebels made him an even bigger target. Pitt’s government published a scandalous biography to stump Paine’s popularity in England, and a spy reported that in Ireland, Paine was “endeavoring to raise and foment a spirit of hatred and discontent.” Under the threat of lawsuits for publishing seditious materials, Paine was forced to emigrate to France in 1792. Upon hearing that Paine was in Paris, some United Irishmen, among them Lord Edward Fitzgerald, paid him a visit. At a party in Paris in 1793, Paine was in attendance when, after having a few drinks, Lord Edward Fitzgerald famously gave up his royal title and denounced monarchy.

In 1796, Wolfe Tone arrived in France to procure a French invasion of Ireland. While in Paris Wolfe Tone met with Thomas Paine, who he described as “vain beyond all belief, but he has reason to be vain.” At this time Paine had a paper called Le Bien informe, which he frequently used to promote the cause of Irish independence, though it seldom mentioned the covert Wolfe Tone. Instead, a much more flamboyant United Irishman, James Napper Tandy, was frequently cited as the leader of an “Army of Avengers” that would free Ireland. Le Bien informe was providing a voice for the United Irish cause on the Continent. British propaganda was consistently accusing the United Irishmen of wanting to exact revenge on Protestants, so Le Bien informe repudiated this by publishing in full the oath of the United Irishmen, “persevere in endeavoring to form a brotherhood of affection amongst Irishmen of every religious persuasion.” However, Tone grew increasingly frustrated with Le Bien informe because it was giving away any element of surprise that a French invasion would bring. In December 1796, a French fleet of about 15,000 men under the command of General Hoche came close to Bantry Bay on the southern tip of Ireland, but inclement weather prevented them from landing – Tone said they were so close that he could have thrown a biscuit upon the shore. Though the attempt at a Franco-Irish invasion failed, the feat of arranging such an attempt was not to be downplayed – writing on this subject, Arthur Wellesly, better known as the Duke of Wellington who defeated Napoleon, said of Tone, “Wolfe Tone was a most extraordinary man, and his history is the most curious of those times. With 100 guineas in his pocket, unknown, un-recommended, and without friends, he went to Paris and persuaded the French Government to send an army of 15000 men to over-throw British authority in Ireland. This was an achievement of genius.”

Undeterred by their failure in 1796, the United Irishmen continued to plan for an all-out rebellion, and Thomas Paine’s support continued. Through Le Bien informe, Paine gave news of new United Irish circles springing up, and encouraged the Irish to fight against tyranny. At a St. Patrick’s Day Celebration in the spring of 1798, Paine and Napper Tandy sat next to each other on the dais and toasted “Long Live the Irish Republic!” That same week, British forces arrested the leaders of the United Irishmen in Dublin, including Thomas Addis Emmet.

Thomas Addis Emmet was imprisoned with his wife and children in Fort George, Scotland until 1802. After his release, he and his younger brother Robert, operating in France and Ireland respectively, attempted reorganizing the United Irishmen. Robert Emmet led a failed rebellion in July 1803, and was executed for treason two months later.

US President Thomas Jefferson accepted Thomas Addis Emmet and his family as political refugees to the United States in 1804. At some point Emmet personally befriended Paine, who was at this point living between his homes in New Rochelle and Greenwich Village. No correspondence between the two men exists today, but in his will Paine listed Emmet as his executor and bequeathed him half of his New Rochelle estate upon his death. One of the first cases Emmet took up as a lawyer in the United States was defending the rights of a runaway slave. He won the case, and in correspondence Paine told a friend to “congratulate Emmet on the Affrican [sic] affair.” To what extent Paine’s anti-slavery views influenced Emmet we cannot say, but Emmet’s son Robert went on to become a New York State Judge that espoused anti-slavery views by opposing the Fugitive Slave Act, supporting the Free Soil Democrats, and eventually abandoning the Democratic Party to help the fledgling Republican Party, for whom he spoke at the first Republican National Convention where he lambasted the institution of slavery and his former friends who upheld the system.

The Grave of Thomas Paine

In a strange sequence of events, a critic-turned-supporter of Thomas Paine called William Cobbett felt that Paine should rest in his native England. Cobbett went to Paine’s grave in New Rochelle, dug up the remains, and brought them back to England. Along the way he might have given some bones to his friends; ultimately he died without reburying Paine and his possessions were scattered – the bones of Thomas Paine were lost to history. Compare this to Robert Emmet, who, after his execution in 1803 was denied a proper burial. His gravesite has still not been positively determined. William Butler Yates famously said that “By denying Emmet a grave, the English have made all of Ireland his tomb.” Paine’s remains are scattered across the world today, just as his ideas of liberty and freedom have been spread across the world.

To view a video commemorating Thomas Paine’s birthday, produced by the Thomas Paine Memorial Association (TPMA), click here. The TPMA seeks to educate the public about Thomas Paine, and in doing so garner donations to erect statues of him in areas where he worked and lived.

The Thomas Paine National Historical Association (TPHNA) is coordinating an international effort with the leading Paine scholars in the world to complete the Collected Works of Thomas Paine, which will double the Paine corpus. Supported solely by donations and membership fees, you should consider showing your support by becoming a member.