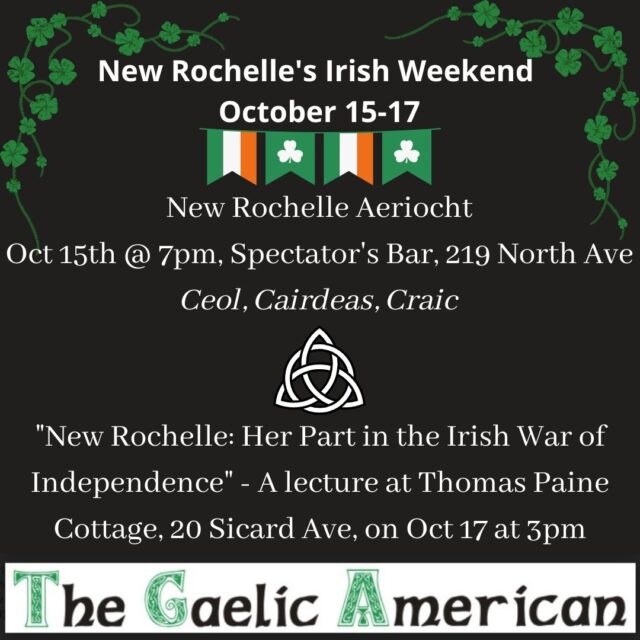 New Rochelle is going to be embracing its Irish roots throughout the weekend of October 15th to the 17th. 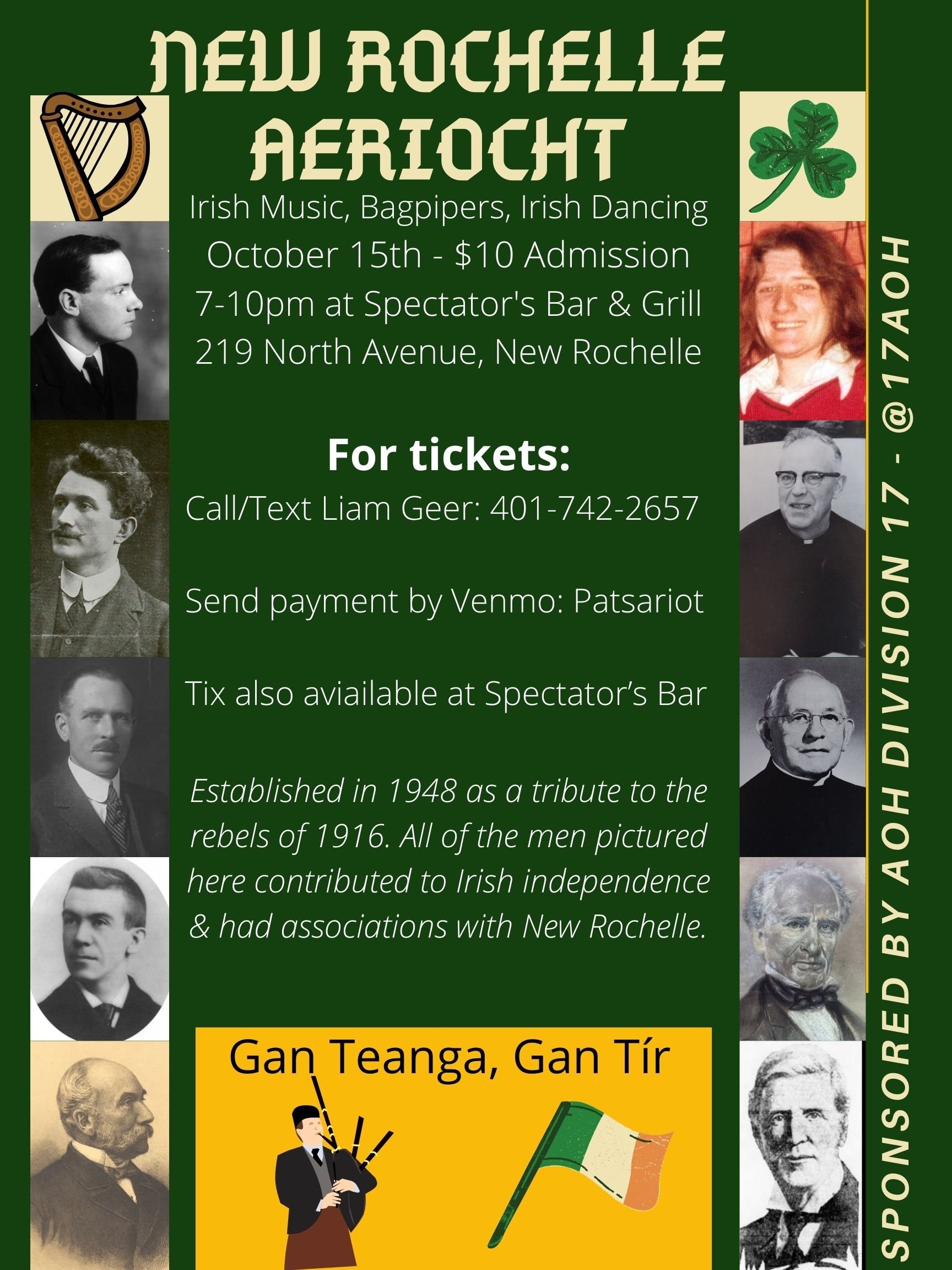 On October 15th the New Rochelle Aeriocht is scheduled to begin at Spectator’s Bar and Grill at 7pm. The Aeriocht began in New Rochelle back in 1948 and featured Irish music, Irish dancing, and Irish language competitions. According to historical sources, the difference between an “aeriocht” and a “feis” was the emphasis on education at an aeriocht. There was also a political element to the New Rochelle Aeriocht, as it was “dedicated to the men and ideals that inspired the Easter Rising of 1916.”

Some of Irish New York’s great musicians and linguists made appearances at the New Rochelle Aeriocht throughout the years. Brother Charles B. Quinn, known to many in Irish New York for his dedication to Irish history and the Irish language, was formerly one of the organizers of the New Rochelle Aeriocht, and many of his language students were to be seen on the competition stage.

Originally held on the grounds of Iona College every May, the Aeriocht lasted into the 1970s, and was eventually superseded by the Iona Gaelic Society’s annual ceili. The New Rochelle Aeriocht was revived by the AOH T.A. Emmet Division 17 to reconnect the city with its Irish roots. Featured on the night will be traditional musicians, led by Seagda Coyle, Irish dancers from the Fordham University and Iona College Irish Dance Clubs, and pipers from the Pelham Regional Pipe Band and the Iona College Pipe Band. Admission is $10. It is sure to be a great night! 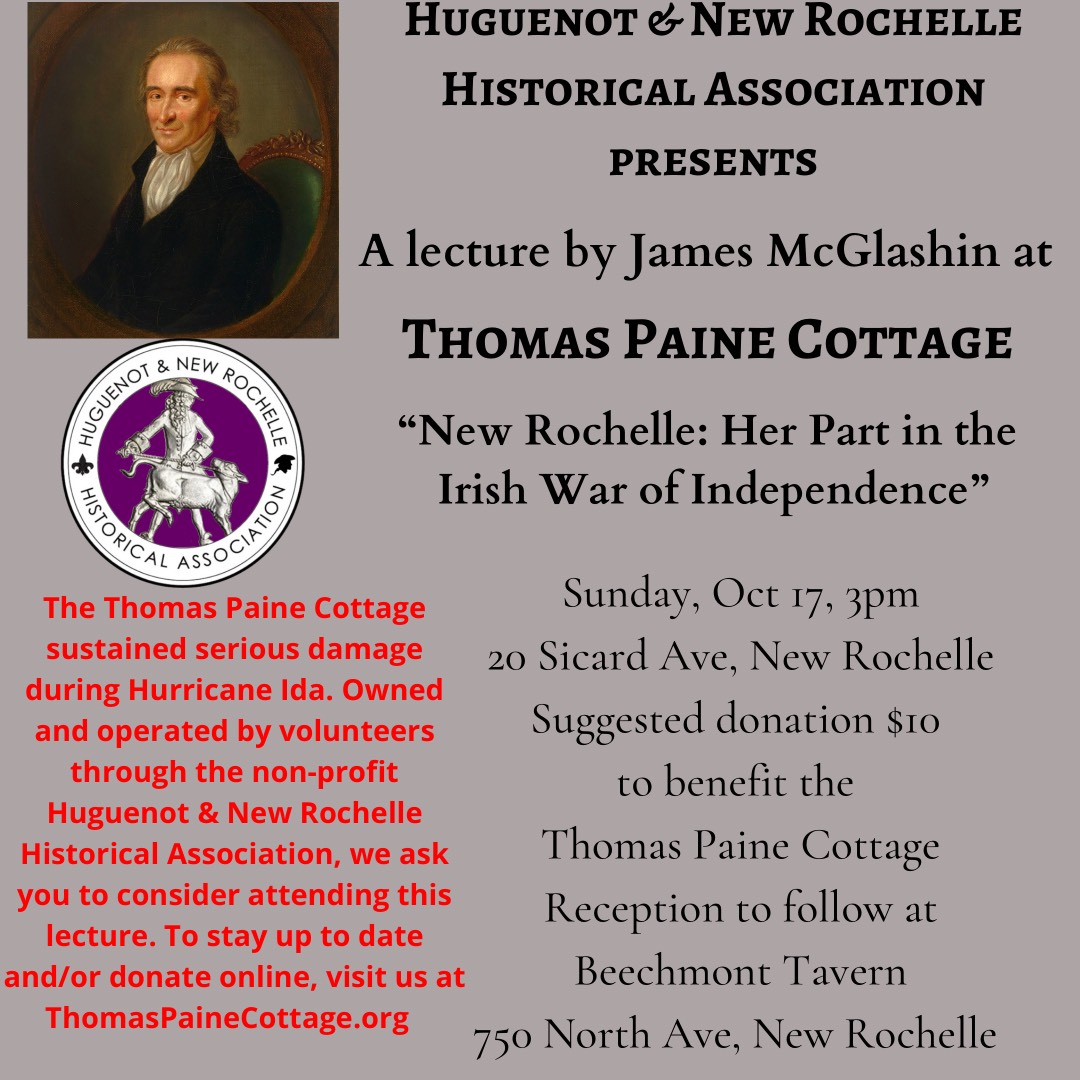 On Sunday October 17th at 3pm, on the grounds of the Thomas Paine Cottage, a lecture is being hosted by the Huguenot and New Rochelle Historical Association as a benefit for the damage they sustained at the Cottage from Hurricane Ida. The title of the lecture is “New Rochelle: Her Part in the Irish War of Independence” and is being delivered by James McGlashin, who has an article of the same name to be published in the upcoming copy of the New York Irish History Roundtable Journal. Irish rebels since the 1798 era have had associations with New Rochelle, and being that Thomas Paine’s pamphlet The Rights of Man inspired the establishment of the United Irishmen, it is an appropriate location for an interesting story. The address of the Thomas Paine Cottage address is 20 Sicard Avenue, New Rochelle, and there is a suggested donation of $10 for those attending. A recording of the lecture will be uploaded to The Gaelic American YouTube channel.