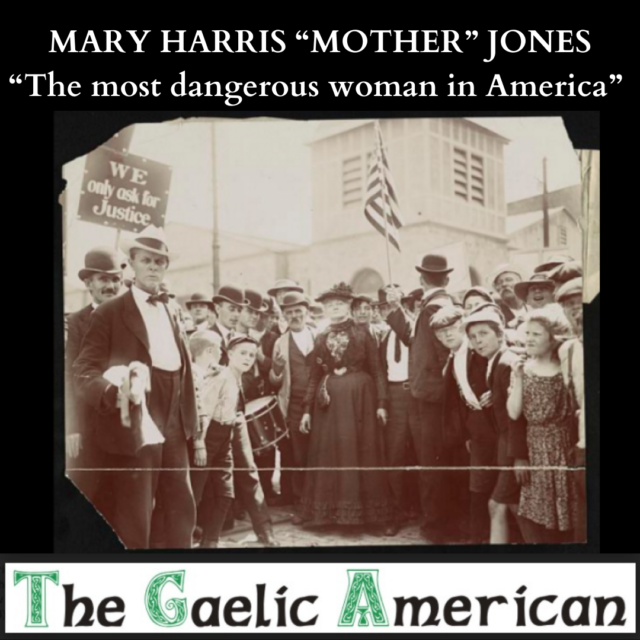 Mary Harris was born on May 1, 1837 in Inchigeelagh, County Cork, to tenant farmer Richard Harris and his wife Ellen Cotter.

The Harris family had a long history of resistance to the British occupation of Ireland. Mary’s paternal grandfather was hanged by the British for his opposition to their oppressive rule. It is likely that during the Tithe War of 1830 to 1836, when Irish tenant farmers were taxed to support the Anglican Church in Ireland, that he became a victim of British retribution for physically opposing such an unjust and oppressive levy.

When Mary was five years old her father emigrated to the United States to avoid the same fate meted out to his father.  After he found employment, housing, and sufficient funds, he sent for his family. His job as a construction worker took him to Toronto where Mary spent her childhood years.

Mary attended public schools in Toronto where she excelled in her studies, graduating high school in 1854. After working as a private tutor in Maine, she moved to Michigan where she received a teaching certificate. After becoming a certified teacher she taught in Michigan for a while before moving to Chicago where she took up dressmaking.

Her dressmaking career in Chicago did not last too long – in 1861 she moved to Memphis to resume her teaching career. It was there that she met and married George E. Jones, an ironmolder who was a member of the Iron Molders’ Union. The next four years were probably the happiest in Mary’s long life. She and George had four children. As work was plentiful in Tennessee they were reasonably well off not wanting for the basic needs to raise a family. However, in 1867 a sudden yellow fever epidemic swept through Memphis, taking the lives of Mary’s husband and her four children. At 37, the happiest years of Marys’ came to an end leaving her devastated and completely on her own.

Unable to stay in Memphis after the loss of her family, Mary returned to Chicago where she established a dressmaking business. Bad luck continued to haunt her her for in 1871 the Great Fire of Chicago destroyed her home and business leaving her homeless and penniless. Alone and desperate she turned to her deceased husband’s fellow union members for help. The kindness extended to her by the union workers was in start contrast to the indifference shown by her wealthy employers for the wretched homeless and poor souls who aimlessly wandered the streets in search of employment or food to feed their families.

In her biography she expressed her revulsion to such wanton indifference when recalling earlier experiences.   “Often while sewing for the lords and barons who lived in magnificent houses on the Lake Shore Drive, I would look out of the plate glass windows and see the poor, shivering wretches, jobless and hungry, walking alongside the frozen lake front. The contrast of their condition with that of the tropical comfort of the people for whom I sewed was painful to me… My employers seemed neither to notice nor to care”.

The compassion of the exploited in contrast to the callousness and indifference of the exploiters galvanized Marys’ resolve to dedicate the rest of her life to the pursuit of a better life and working conditions for the ordinary working man, woman and child.

For the next number of years Mary made Chicago her base as she traveled throughout industrial areas working as a union activist with the Knights of Labor, whose purpose was “to unite all workers under a single organization“. She had a real talent for inspiring others with her speeches and on many occasions she convinced workers to stay the course when the management brought in strike-breakers and militias.

In 1873, during a coal miners strike in Pennsylvania she came face to face with Irish coal miners, many of whom were veterans of the Civil War. The conditions she witnessed bordered on slavery with women and children near starvation. It was her efforts on their behalf coupled with her concern for their welfare that earned her the nickname “Mother Jones.”

The era of unionization Mother Jones lived through was extremely militant and dangerous. She was present at strikes that were physically broken up and even fired upon by police.

Apart from her involvement as an organizer and educator in striker tactics, she gained prominence for organizing the wives and children of striking workers in demonstrations on their behalf. She became known as “the most dangerous woman in America,” a phrase coined by a West Virginia district attorney, Reese Blizzard, in 1902, at her trial for ignoring an injunction banning meetings by striking miners.

One of Jones’s best-known exploits was leading a march of miners’ wives “who routed strikebreakers with brooms and mops in the Pennsylvania coalfields in 1902.“. Another was leading the “children’s crusade,” a caravan of striking children from the textile mills of Kensington, Pennsylvania, to President Theodore Roosevelt’s home in Long Island, New York, in 1903, to dramatize the case for abolishing child labor.

Jones’s activism resulted in her being arrested and sentenced to jail multiple times. Because of her prominent involvement in labor-organizing circles in this era, it is likely that she came in contact with Irish labor leaders James Connolly and James Larkin, who both had stints organizing in America in the early 20th century.

The tireless efforts of Jones and her fellow workers directly resulted in conditions we take for granted today, like the banning of child labor and the eight hour work-day / forty hour work-week. Mary Harris “Mother” Jones died in Silver Spring on November 30, 1930. She is buried in the Union Miners Cemetery at Mount Olive, Illinois, in the coalfields of southern Illinois. Her grave is near those of the victims of the Virden, Illinois, mine riot of 1898.

Contributed by Tomás Ó Coisdealbha. This article appears in full length at FenianGraves.net