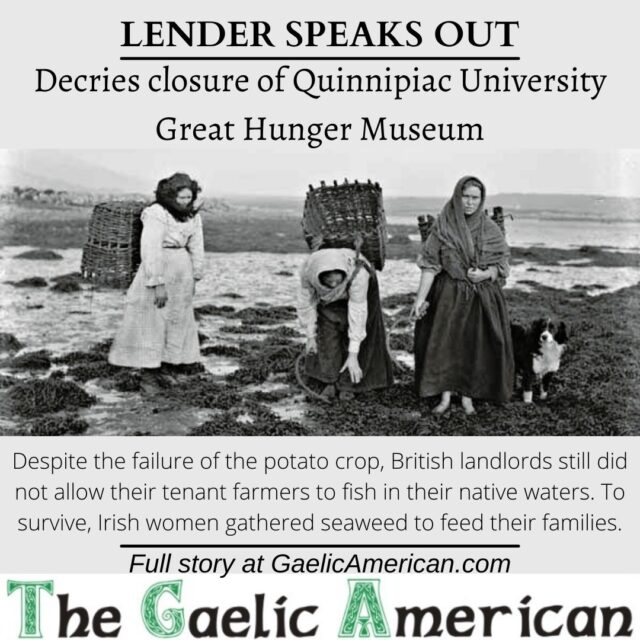 In the 1840’s starvation forced many Irish citizens to move overseas. This starvation occurred at the behest of the British government, who removed food from Ireland at gunpoint to feed their booming population. Many of these emigrants died along the treacherous journey to the United States, in what were dubbed “coffin ships.” Once here in the US, the struggle continued as poverty and disease in crowded buildings was rife. Immigrants arriving with detected medical problems were sent to the Marine Hospital Quarantine Station in Staten Island, NY. Malnutrition, scurvy, dysentery, measles, and TB led to many Irish immigrants dying during their quarantine; a tragic end to a hard life.

In 2014 the bodies of 83 men and women, who had been buried in a mass grave behind the former Quarantine Station in Staten Island, were removed for proper burial in a nearby cemetery. DNA testing showed that all the dead were of Celtic ancestry. Cece Saunders, an archaeologist who examined the bodies, noted that the teeth of the deceased showed they suffered from extreme hunger and stress. It was in memory of these nameless immigrants and their millions of countrymen, who suffered hardship in the midst of plenty, that Quinnipiac University opened Ireland’s Great Hunger Museum in 2012.

The announcement of the permanent closure of Ireland’s Great Hunger Museum at Quinnipiac University in August 2021 has been met with opposition by much of the Irish community. The Gaelic American covered the initial protest by a combination of Irish groups, and noted the hypocrisy of the closure –

“Financial cost is the reason given for the museum’s closure. The irony of this excuse is the ignorance of the lesson the museum was designed to remind us of – Quinnipiac is denying the right of people to see this museum, a small cost, in the midst of so much frivolous spending. Money is in the budget for Quinnipiac’s President Olian to earn almost $1 million annually, and pay her administrators astronomical amounts of money. Not to mention that after taking office, Olian began a university-funded renovation of the President’s Mansion at a cost of $1 million.”

Marvin Lender and his late brother, Murray, were major donors to Ireland’s Great Hunger Museum. Recently Marvin Lender sent an open letter to the Connecticut Attorney General, who is reviewing the closure of the museum.

Lender said, in part, “I learned with profound sadness and disappointment that Quinnipiac University has decided to permanently close Ireland’s Great Hunger Museum, a museum that was very near and dear to our family’s heart. Its very existence is rooted in the philanthropy of our family and, more specifically, my brother Murray and me…

“When then-President John Lahey told my brother about the Irish Potato Famine and the atrocities of that time, it so resonated with us both, as we could easily identify with its importance based upon our own Jewish heritage. Wanting to make this story public, we approached John and gave significant money to renovate a library on the campus that would house art and archives to tell the story of the Great Hunger…

“The museum tells people of all races and ethnicities the horrors of social injustice, bigotry, governmental indifference, and outright oppression…

“Our intent as donors was that the collection, wherever it was housed, was to be an educational tool for Quinnipiac, Hamden, Greater New Haven, and the Northeast corridor, as well as a chronicle of the Irish people of that time, many of whom had emigrated to the United States.

“I hope that with your encouragement, Quinnipiac will once again reconsider the wisdom of its actions.”

At recent demonstrations to save the museum, many members of the Connecticut Irish-American community offered to make donations or volunteer their time in the event Quinnipiac opted to reopen the museum, but unfortunately these offers have fallen on deaf ears. As the pressure on Quinnipiac must continue, we encourage our readers to join the Save Ireland’s Great Hunger Museum Facebook group to show solidarity.

Story Behind the Song: The Ballad of Joe McDonnell