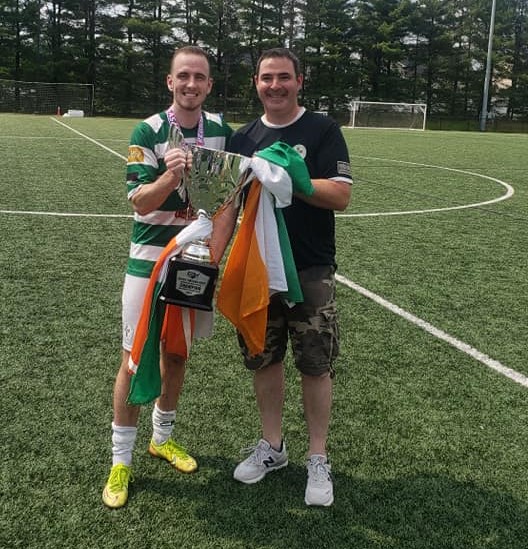 Yonkers, NY – Yonkers’ premier soccer club are on the path to national glory once again. Around this time last year, Lansdowne Yonkers Football Club announced that they were going semi-pro when they joined the newly formed Eastern Premier Soccer League. Today, we’re looking at the prospect of what is shaping to be the best season in the club’s 25-year history. While most of their competition are resting and gearing up for the upcoming 2021-22 season, Lansdowne have a stacked summer schedule, where they are currently in the running for 4 major titles. Boasting talent from League of Ireland, EFL League Two, A-League, and USL such as Daryl Kavanagh, Joseph DeVivo, Shaquille Saunchez, Paddy McCann, and the recently recruited Shamir Mullings, they have been the world-beaters in the realm of Amateur/Semi-Pro soccer, and every opponent treats them as their biggest match. If you count the EPSL Metropolitan Conference trophy Lansdowne already clinched in May, a victory in all of their upcoming competitions would make them the first amateur / semi-pro quintuple in U.S. Soccer history.

Here are the titles Lansdowne are in contention for:

Lansdowne Yonkers are in the EPSL Final 4. They achieved a direct-berth by virtue of finishing 1st in the very competitive Metropolitan Conference, where they had to win big and grind out results from tough adversaries such as NY Pancyprian Freedoms, Doxa, and Zum Schneider. It came down to the final matchday of the season, where a 2-2 draw on the road to Pancyprians earned them the regular season championship. On July 23rd, they will travel to Monmouth County, NJ, where the finals will be held at the Capelli Sports Complex. Joining Lansdowne will be the playoff champions of the other 2 EPSL conferences, as well as their title rival NY Pancyprian Freedoms, who finished 2nd and had to play an extra qualifying round to be there. Their semi-final match will take place on Friday night, July 23rd at 7 PM EDT. A win on Friday, and they go to the inaugural EPSL Championship match on Sunday July 25th at 1PM EDT.

Lansdowne are traveling to Seatgeek Stadium (the former ground of MLS-side Chicago Fire) in Bridgeview, IL, an immediate suburb of Chicago to compete in the Final 4 of the National Amateur Cup as champions of Region 1 (The Northeast USA). They achieved this with hard fought victories against NY Greek Americans, Safira FC, FC Motown, FC Brockton United, and West Chester SC. They will compete against the likes of sides such as Springfield FC, Nashville United, and the famous Cal FC, who are known to be the only amateur side to defeat an MLS club in US Open Cup play. Their matches will be seeded close to the finals weekend, and they will have to play their semi-finals and final on back-to-back days that Friday August 6th and Saturday August 7th at 5:30pm CDT, and 1pm CDT respectively. Lansdowne are competing for their 2nd National Amateur title, which they previously won in 2017.

The Fricker Cup is USASA’s other major cup competition, similar to the EFL League Cup. Lansdowne are currently the defending champions, having won their 2nd title in 2019, and they are looking to add a 3rd when they travel to Wayne County in the Detroit metropolitan area. Lansdowne are representing Region 1 after winning the region 1 championship, defeating International SC, FC Westchester, and Clifton Elite in hard fought matches to get there. Like the National Amateur Cup, Lansdowne have to compete on back-to-back nights with the semi-finals and final on August 20th and August 21st.

Lansdowne have been invited to compete in the New England Region of the National Independent Soccer Association (NISA) Amateur Cup. In this competition, Lansdowne will face off against 2019 National Amateur Cup winners Newtown Pride, NISA’s fully professional New Amsterdam FC, and the EPSL Northeast playoff champions Mass United Rush. The matches are round-robin, and Lansdowne simply need the best record of the 4 to win the New England region trophy.

Club president William McGrory, a native of Donegal, and Yonkers residents for the past 20 years, has overseen the impressive growth of this football club over the past decade. Lansdowne Bhoys FC, as they were known at the time, were an average Cosmopolitan Soccer League side at the start of the 2010’s, but has since won numerous trophies, and made national headlines when they defeated the professional United Soccer League team Pittsburgh Riverhounds in the 2016 US Open Cup. In 2017, they became one of only 2 clubs in the entire United States to win the amateur double, and are looking to become the first to do the double twice. In 2018, they rebranded as Lansdowne Yonkers to represent the city they play in. They also developed a robust soccer camp and academy system with over 26 teams that compete at nearly every age level. Their U-16 team, the Lansdowne Yonkers Thunder, made the regional semi-finals before being edged out by the Barca Academy (the NY win of the famous FC Barcelona in Spain). Lansdowne are the first semi-professional team Yonkers has had since the 1995 Minor League Baseball Team, the Yonkers Hoot Owls, and strive to be the first ever pro-team in town. “The goal is to win, get promoted up the ranks in the NISA pyramid, find investors, and move into a permanent stadium,” remarked McGrory, who sees the sky as the limit for this football club.

All of their matches will be available for viewing on the Gaelic American website and Facebook page.