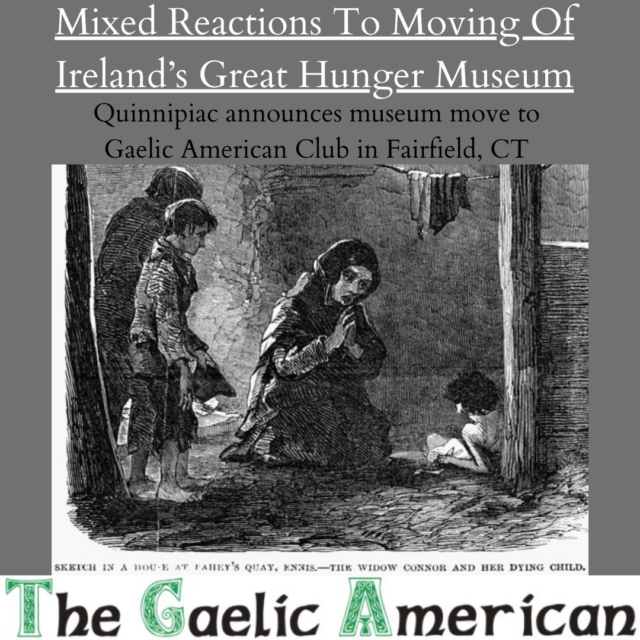 Ireland’s Great Hunger was and is an incredibly important time in modern history for the Irish people and their diaspora. The horrifying experiences of the Irish living under British rule at this time sent their people around the world in search of better opportunities, while never forgetting the evictions of peasant farmers and the widespread confiscation of their food. It resulted in a powerful movement to reclaim their land, both through agrarian agitation and through physical force republicanism. That is why the 1845-1850 period is doubly important – for both its immediate impact of widespread death and emigration, and its far-reaching political impact on future generations.

A witness to the starvation in Cork, Irish rebel O’Donovan Rossa recalled when his family were forced to emigrate, “The day they were leaving Ireland, I went from Skibbereen to Renascrenna to see them off. At Renascrenna Cross we parted… Five or six other families were going away, and there were five or six cars to carry them and all they could carry with them, to the cove of Cork. The cry of the weeping and wailing of that day rings in my ears still. That time it was a cry heard everyday at every cross roads in Ireland.”

Such memories of Ireland’s 1845-1850 era are encapsulated by the Great Hunger Museum at Quinnipiac, which is why we should all be concerned about its future. Last week Quinnipiac University announced that the Great Hunger Museum’s collection, the most extensive in existence relating to the 1845-1850 era, will be moved to the Gaelic-American Club in Fairfield, CT. [Note the Gaelic-American Club is not affiliated with this publication.]

John Foley, Vice-President of the Gaelic-American Club, added, “Now that a clear path forward has been established for the collection, it is time we unify our collective efforts and all rally around the shared goal of ensuring the future visibility and impact of the collection and the story that it tells.”

The statement from Quinnipiac included plans to create an educational partnership with the Gaelic-American Club, which would increase use of the collection and foster better education of an influential era that is usually summed up in one brief sentence in modern history books. However, not all parties are happy with Quinnipiac’s announcement.

John Lahey, the former president of Quinnipiac University who oversaw the creation of the museum, expressed his disappointment at the school’s decision to disregard this connection to the Irish-American community. He said, “Frankly I’m embarrassed that a university of Quinnipiac’s standing would be closing a museum near their campus at a time like this, a museum dedicated to educating people about bigotry and discrimination.”

Turlough McConnell, Executive Director of the Committee to Save Ireland’s Great Hunger Museum, questioned the appropriateness of the decision, the main problem being that the Connecticut Attorney General has not completed his investigation into the closure of the museum. He also expressed concern of the suitability of the museum at the Gaelic-American club, citing its existence as a social club. McConnell’s committee contends that the appropriate place for this collection is at Quinnipiac University, where its donors intended for it to be.

While Quinnipiac University President Judy Olian has shown little desire to keep the museum at Quinnipiac, she has claimed that they will keep the collection together as much as possible, in line with their donors’ wishes. John Foley explained that the motivation of the Gaelic-American Club stepping up to accept this deal was the fear of all Irish-Americans educated on the issue – “We did not want to lose the collection.”