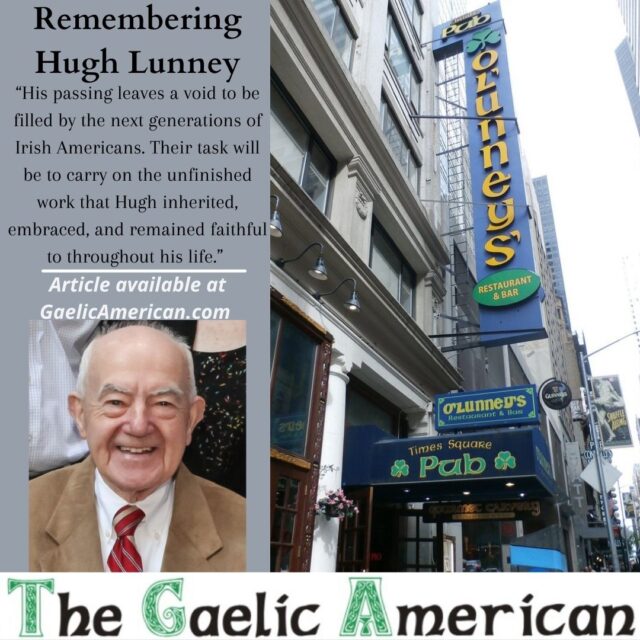 February 18, 2022 marked one year since the passing of Hugh Lunney. Known to some as Hugh O’Lunney, he was a giant in the New York Irish community for a lifetime. As the proprietor of O’Lunney’s Bar in Times Square, he was host to a litany of Irish organizations from the time he first opened his doors in 1968. Supported by his wife, Maureen, and children, Maureen, Emmet, and Kevin, he made O’Lunney’s one of the most successful bar and restaurants in New York City.

He was born in 1936 in the village of Swanlinbar, County Cavan. From an early age he learned the evil of partition – the British imposed border of 1921 had cut right through his parish, putting one half of the community under British rule in County Fermanagh, and the other half under the rule of the Irish Free State in County Cavan.

From his arrival in the United States, Hugh Lunney was the living embodiment of the line in the Easter Proclamation which stated “supported by her exiled children in America”. He supported Irish Northern Aid by hosting fundraisers and by buying ads in their organ, The Irish People. On March 17, 1983, Michael Flannery, leader of Irish Northern Aid and a pariah to much of the establishment media for his unwavering support of the armed struggle, had his St. Patrick’s Day Grand Marshal reception at O’Lunney’s. In 1998, when Bernadette Sands McKevitt (the sister of Bobby Sands) visited New York to dissuade American-based Irish Republicans from supporting the Good Friday Agreement, she had her press conference at O’Lunney’s – under the same banner of Bobby Sands that Michael Flannery had sat under in 1983. In 2015, Hugh Lunney was the first person to sign the 1916 Societies’ New York petition for “One Ireland, One Vote”.

A few of Hugh’s friends contributed their memories of him for this article:

I first met Hugh Lunney in 1980 when an old-time staunch republican activist, George Harrison sent me to him for advice. I arrived at his O’Lunney’s Pub in midtown Manhattan, and after an introduction and a thorough conversation, walked away with not only advice but a donation for the New York H-Block/Armagh Committee, of which I was the chairman.  That was Hugh Lunney, a no-nonsense Cavan man who was generous, kindhearted, honorable and solid as a rock when it came to his belief in a united Ireland.  We remained friends and comrades for over 40 years, and during that time my whole family grew close to him, his staff and especially his daughter, Maureen.  For decades, we had all our family and friends’ gatherings—which could be quite large– at his pub— including Christmas, Saint Patrick’s Day and mid-summer.  O’Lunney’s Pub was my “local” even after I left for the wilds of Rhode Island.

Hugh believed fiercely that English dominance has no place in Ireland and never had. Every time I needed a meeting place or a fundraiser for the Fenian Memorial Committee of America or another group he was the first one I went to—and he never said “no.”

When I learned, shortly after the genesis of the pandemic —through Maureen– that he was closing his pub, I felt that I was losing a part of my heart.  Later, we discovered that his simmering illness had worsened, and my wife, Annie and I went down to see him at his home. After we arrived at a local pub near his house, Maureen came to have a drink with us, since he was not feeling up to having visitors. We understood but were severely disappointed. Maureen handed me an envelope—with a note in it and my name on it. I knew it was from him but couldn’t bring myself to open it. Before we departed for the long ride to Little Rhody, Maureen asked us to drive by the house, and she would try again. He agreed to see us on his front porch, and we were overjoyed. We sat there with masks on in garden chairs with him and his wife, Maureen and Maureen Og for more than an hour, laughing and telling stories. It would be the last time we would see him.  In the car—after beeping the horn and waving– I opened the envelope. “George, keep honoring the brave Fenians!” it said, with his signature. There were two one-hundred-dollar bills inside. That was Hugh Lunney.

Hugh Ó Lunney will be remembered by the New York Irish as an icon of Irish cultural and political nationalism alongside other departed luminaries such as Mike Flannery, Joe Stynes, Paul O’Dwyer and Frank Durkin. His lifelong dedication to Irish causes including Irish unity was absolute and uncompromising. His establishment in Times Square was legendary, a required destination for Irish political activists visiting the United States.

Hugh’s knowledge and insights into the Irish American political scene was first-hand and invaluable, particularly for Irish activists petitioning American politicians for help in redressing the unrest and chronic political situation in Ireland caused by the ongoing British presence. His name was on every organization’s contact list throughout the tri-state area and his presence at an event was noted with pride and deference. He was our quiet ambassador, our voice of reason.

In his youth, Hugh left the small village of Swanlinbar in Co. Cavan for the lights of Times Square in New York where over time and interactions with the meek and mighty weaved his way into the annals of the New York Irish.  Hugh was a self-possessed man—unassuming, a team player who did not seek the limelight or accolades. His passing leaves a void to be filled by the next generations of Irish Americans. Their task will be to carry on the unfinished work that Hugh inherited, embraced, and remained faithful to throughout his life.

Some years ago, Hugh was asked to help the Wounded Warriors.  He called a meeting of a few friends, all of whom were veterans of the American armed forces, and told them that he wanted to host a benefit for the Wounded Warriors, and to do it on a date of great significance for American military history.  The first thought by some was the 19th of April 1775, marking “The Shot Heard ‘Round the World”.  Hugh said, “the 23rd of February”.  There was silence, until he added, “the date that the Marines raised the flag on Iwo Jima.”  The flag-raising atop Mount Suribachi took place on February 23, 1945; five days after the battle began.  Associated Press photographer Joe Rosenthal took the iconic photograph of five Marines and one Navy hospital corpsman raising the flag.  Hugh was a teenager in Ireland at the time, and that photo was probably on the front page of every newspaper in Ireland.  He never forgot it – a giant step toward his American patriotism.  He offered half of his famous restaurant (which had two separate front doors), for a fund-raising party for the Wounded Warriors.   Upon entry  through the westerly door, you wrote a check for $50, and received a green wrist band from his lovely daughter, Maureen, and for the next three hours you were fed and watered, without yourself having to go to the bar, and entertained (Hugh hired three bands, each to perform for an hour, to provide musical variety for the occasion).  The only speech, of less than ten minuites duration was neither by Hugh, nor by any politician, but by the Commanding Officer of the active battalion of “The Fighting 69th”, in uniform, who stood on a chair, briefly, for the purpose.

The flags of each of the American armed forces were proudly displayed at all times in the restaurant, as was a copy of the 1916 Proclamation of the Irish Republic.

O’Lunney’s also provided the venue for a variety of Irish events, usually held in his second floor, which could seat a hundred people.  One of these was a special, bi-lingual Gaedhilge/Bearla Irish luncheon in honor of the late historian, Nollaig Ó Gadhra, for which occasion his family flew in from Galway.

Every Saint Patrick’s Day the Coast Guard Captain of the Port of New York, and the other members of his group (including the Chair holder of the Coast Guard Art Program), after the Mass in Saint Patrick’s Cathedral (for the deceased members of the 69th Regiment of New York) would come to breakfast at O’Lunney’s, before going to their seats in the main Reviewing Stand.  Certain other uniformed marching units would also begin their day with breakfast at O’Lunney’s.

Hugh O’Lunney, now of sainted memory, was a great patriot, both of the United States, and of Ireland – it was in his genes, and he never hesitated to always do the right thing.

I first met Hugh when I served him a pint of Guinness in The Heritage on McLean Avenue in about 2018. We instantly had a lot to talk about and he asked me did I know George McLaughlin, to which I replied of course. It was then that we realized we were both members of the Fenian Memorial Committee of America. Since then, I had the privilege to meet Hugh several times at his pub for meetings, fundraisers, and an occasional pint. While I am saddened for not having known him better, I am honored to have known him at all. As this article is being written, I received news that the Fenian Memorial Committee of America has been officially incorporated – one year to the day of Hugh’s passing.

Hugh Lunney was buried on February 23, 2021 in St. Raymond’s Cemetery in The Bronx – nearby fellow Fenians Augustine E. Costello and Thomas P. Tuite, both “men of 1867.”