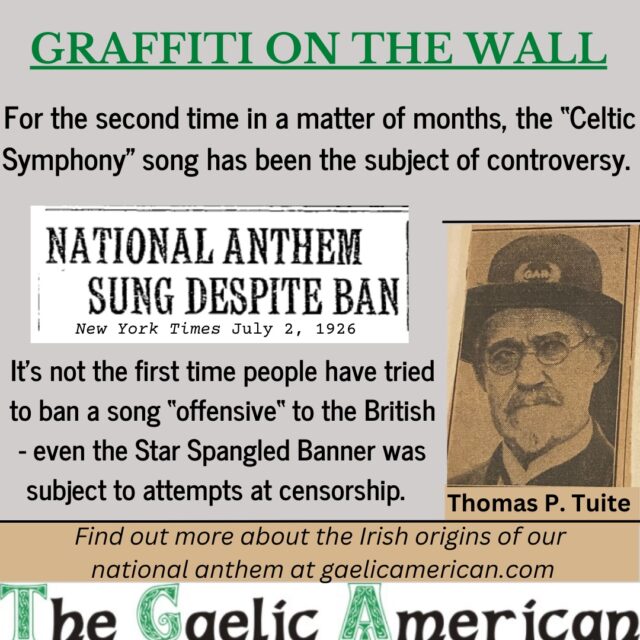 After the Irish women’s soccer team was taped singing “Celtic Symphony” a couple of months ago, and after the Leinster Rugby stadium played “Celtic Symphony” last week, the press has attacked those singing the song and derided the offensiveness of the song, in which the lyrics “up the ‘ra” connotate support for the outlawed Irish Republican Army (IRA), who waged guerrilla campaigns against British rule in Ireland in 1916, 1919-21, and 1969-98. The song was written by The Wolfe Tones to show support for the Celtic Football Club, whose supporters are traditionally Republican. The song has been a mainstay of Irish music for upwards of 40 years, yet now in an era of censorship, individuals have called for the “Rebel Song” to be banned – this policy is repugnant in a republican society, itself founded by people who used “offensive speech.”

A century ago in the United States, a similar scene existed.

During the War of 1812, Francis Scott Key was a prisoner while the Battle of Fort McHenry was waged, and after witnessing the fort’s bombardment but the American flag still flying, he was inspired to write the “Star Spangled Banner.” It was a patriotic tune known to many, but it was not immediately made the national anthem.

The most prominent member of the Star Spangled Banner Association was Thomas P. Tuite. Born to Irish “Famine” immigrants in Ohio ca.1849, he was a decorated member of the Detroit Fire Dept., and later joined FDNY. He fought with the Union Army when he was just 14, and when he was 18 he sailed to Ireland to take part in the Fenian Rising – he had no sympathy for the British Empire.

At a hearing in 1922, where he was encouraging New York officials to teach the “Star Spangled Banner” in their curriculum, he was verbally attacked by some committee members:

The little gray-haired man landed a blow on Kinnicutt’s jaw with unexpected force, especially considering that he had to stand on tiptoe to deliver it, for his opponent is some three inches taller than six feet…

Tuite frequently led walkouts of events that refused to sing the entirety of the “Star Spangled Banner.” In 1926, at a gathering of a religious group called the Port Society, the event’s organizer said there would be no playing of the national anthem because “those words in the third verse are unfair to England. They were written when we were at war with England, and they were written in a spirit of hatred. They are not pretty at all.” Tuite called on all good Americans to leave the event, and many followed. He fully believed in the right of America to assert its nationhood in song and verse, even if the words were “not pretty.” His enthusiastic conviction in the right to free speech, the right to offend, and the right to protest led to Congress and the President adopting the “Star Spangled Banner” as our national anthem in 1931.

The right to offend someone with the singing of “Celtic Symphony” is therefore inherent, but even if one were to find that “Celtic Symphony” were offensive, what would be an appropriate recourse? Should the signing of songs that cause offense result in a fine or arrest?

The question then arises, what to do with the British national anthem? If we were to consider a body count of organizations that caused starvation, slavery, and slaughter, the British Empire is probably second to none, yet there is never a consideration of banning “God Save the Queen/King.”

Such a ban would not be desirable to republicans because it would encroach on a royalist’s right to free speech. Further, it would be nonsensical to suggest that the British government might reconsider their national anthem – it is their chosen song and does not represent their detractors.

During The Troubles, rebel songs and Irish Republican politicians were banned from the radio and TV, and in the 1916 era those who dared sing a rebel song could be jailed under the Defense of the Realm Act. In the days of the Fenians, too, the singing of a rebel song was grounds for arrest. One hopes such a situation would never arise again, but with the rising popularity of hate speech legislation in Europe, it is unfortunately a strong possibility.

Click here to listen to Charlie and the Bhoy’s response to 2011 Scottish legislation that banned rebel songs from soccer stadiums.

Click here to read the full lyrics of the “Star Spangled Banner.” The third verse caused offense because it derided the British use of foreign mercenaries and slaves to fight their cause against the American colonists.