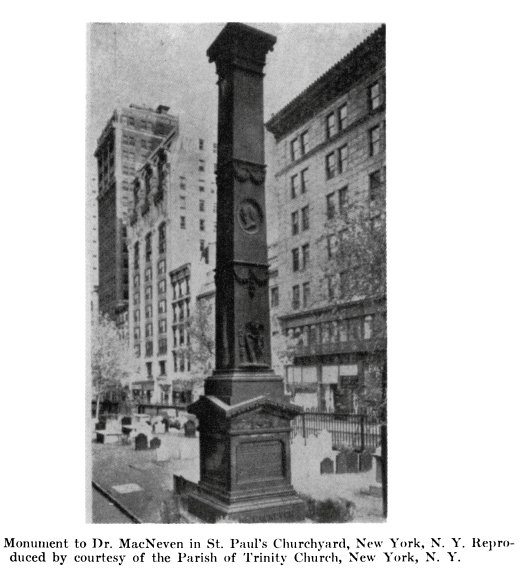 William James MacNeven was born in Ballynahowna, Co. Galway, Ireland on March 21, 1763. Historically, the MacNeven family were wealthy Ulster landowners before being dispossessed of their lands and forced to relocate to Connacht during the excursion of Oliver Cromwell. They owned a small estate in Galway, and there they had retained some wealth as compared to their fellow Catholic neighbors.

As a Catholic growing up in the 18th century, MacNeven was subjected to the Penal Laws that were imposed by the British government. Under the Penal Laws, Catholics were not allowed to be educated, vote, sit in Parliament, bear arms, or work in certain professions. Gradually some penal laws, like the threat of execution of clergy if captured, were being relaxed, but many still existed at the time MacNeven was born.

Being denied the right to go to school in his own country, MacNeven was sent to Prague when he was eleven years old to be educated. His uncle, William O’Kelly MacNeven, lived in Prague where he worked as a physician and tended to Austrian nobles. When it was time to progress in his studies, MacNeven next went to the Medical University of Vienna, where he graduated in 1783. Having graduated the same year the American Revolution ended, one would imagine many classroom discussions centered on the topic of republicanism.

In 1784 MacNeven returned to Dublin to practice medicine. During the ten years or so he had spent on the continent he acquired an extensive knowledge of modern languages including French, German and Italian, which he spoke fluently. He was also a native Irish speaker. He became involved in public affairs upon his return to Ireland, first becoming a member of the Catholic Committee, which agitated for a repeal of the Penal Laws. Being a member of the Catholic Committee, he came in contact with other forward thinking men such as Theobald Wole Tone, James Napper Tandy, and Thomas Addis Emmet. This connection was to be historic, as these men were to come together in 1791 to form the Society of United Irishmen. Initially advocating for constitutional reforms, the group became a revolutionary organization devoted to “breaking the connection” with England, and “substituting the terms of Catholic, Protestant, and Dissenter, for the common name of Irish man.” Of the original members of the Dublin Society of United Irishmen, MacNeven was one of just two Catholics.

In March of 1798, many leaders of the United Irishmen, including MacNeven, were arrested by the British. The British government had riddled the organization with spies and with their leaders in custody, Wolfe Tone’s plans for rebellion were severely stunted. He was to be imprisoned with his comrades, and then sent to Fort George in Scotland, where the most prominent of the United Irishmen were held until 1802. MacNeven and the remaining prisoners were released on condition that they not return to Ireland.

Like his friend Thomas Addis Emmet, MacNeven initially went to France, where he worked as a surgeon-captain in Napoleon’s Irish Brigade. After doing some travelling through Europe, he set sail for the United States. Emmet remarked that he arrived in the United States on the “appropriate” date of July 4, 1805.

Dr. MacNeven’s life in America was no less notable. He married into the Dutch settler Riker family, and established himself as a reputable doctor in his new city. He published several works, including “Rambles through Switzerland” (1803), “Pieces of Irish History” (1807), and “Exposition of the Atomic Theory” (1820). MacNeven’s extensive scientific research earned him the title “Father of American Chemistry.” He taught the next generation of doctors in the College of Physicians and Surgeons and the Rutgers Medical School, and spent his free time helping new Irish immigrants get on their feet through various organizations that assisted with settling in the west, naturalization, and obtaining employment.

At the age of 78 William James MacNeven died on July 12, 1841, at the home of his son in law, Thomas Addis Emmet, Jr. He is buried in the Riker-Lent Family Cemetery in Astoria, Queens. An obelisk was erected in honor of Dr. MacNeven in St. Paul’s Churchyard, New York, alongside monuments to fellow Irishmen Thomas Addis Emmet and General Richard Montgomery (Continental Army).