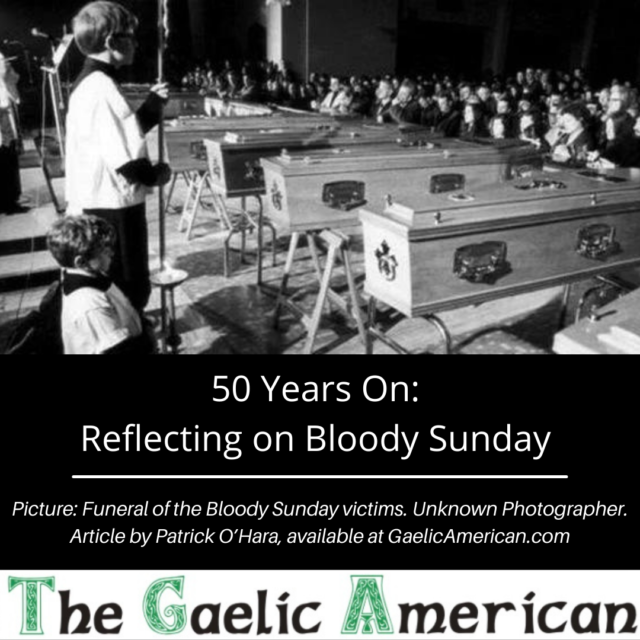 What was “Bloody Sunday”?

January 30, 1972 is a date forever ingrained in the minds of Irish people, both domestic and abroad. One could write a senior thesis on the event, but for the reader’s sake, I will condense the course of events. Thousands of the people of Derry were peacefully protesting the British policy of internment. Internment refers to the mass incarceration of Irish men believed to be involved with the Irish Republican Army, without any evidence required. Beginning on August 9, 1971, thousands of homes in predominately Irish/Catholic areas were raided by the Royal Ulster Constabulary (RUC), the police force in ‘Northern’ Ireland, with the assistance of the British Army.

In the Belfast neighborhood of Ballymurphy, the Parachute Regiment was deployed to enforce the internment swoop. The result of the Parachute Regiment’s ruthlessness over those days was nine dead Irish civilians, including a priest and a pregnant woman – murdered at the hands of the British Army. Were the soldiers held accountable for their war crimes? No.

The 1st Battalion, Parachute Regiment was sent to Derry on January 30, 1972 for ‘Operation Forecast,’ a planned arrest of protesters.

The Irish people resisted. In a march organized by the Northern Ireland Civil Rights Association, thousands gathered for a peaceful demonstration. As the peaceful demonstrators made their way down William Street, on their way to Guildhall in the city centre, they encountered a blockade set-up by the 1st Battalion, Parachute Regiment, which prevented the march from continuing the planned course. Minor skirmishes broke out, such as rock throwing by the protesters. This did not include nail or petrol bombs, and there were no IRA members present. The British Army’s response was to shoot 26 unarmed Irish civilians. Of those 26, 13 died instantly, and a 14th died of his injuries four months later – all murdered. A number of them were shot in the back, and one was shot while waiving a white handkerchief.

Bloody Sunday impacted the lives of innumerable Irish men and women, in the Republic, the North, and abroad. To understand how the lives of those in the North were impacted, one must look to the individual – we look to a Derry man, Patsy O’Hara.

Patsy was born on Bishop Street in 1954. Patsy’s older brother Sean Seamus O’Hara was active politically in the North from a young age. Sean participated in civil rights marches from 1967 on. Intrigued and inspired by his older brother, Patsy participated with him. Sean was arrested and interned without trial for his efforts. The very reasoning for the peaceful protest on ‘Bloody Sunday,’ was an everyday reality for the O’Hara family.

It was during these marches for equality, 1967-68, Patsy seen first-hand the brutalities committed by the RUC and British Military. Rubber bullets, water cannons, and tear-gas unleased on civilians who were simply seeking equality. Patsy himself was a victim of this brutality. Without cause, Patsy was shot immediately after exiting his home while on the way to a friend’s home, by British soldiers ducked behind barricades. He was only fourteen years of age, a mere child.  The soldiers unsurprisingly were not held accountable.

Due to his injuries, Patsy was unable to participate in the protest 30 January 1972. Alongside his father, Patsy watched the march go into the Brandywell. He was proud of his fellow Irish men and women, but unable to walk alongside and with the march out-of-sight, he returned home to listen to the event on the radio. After hearing the horrors of what took place, Patsy no longer thought marches and demonstrations were an effective measure against the brutal illegal British Government, British military, or the RUC (now the PSNI). Patsy, like hundreds of other young Irish men and women at the time, did what the British government pushed him to do. He joined the ‘Republican Clubs,’ a paramilitary organization that initially sought to combat British atrocities with physical force. Patsy was active in the Republican Clubs shortly after Bloody Sunday until 1973. In ’73 the organization abandoned its physical force philosophy and adopted a policy of reform.

Patsy himself became a victim of internment. After the first time, upon his release in 1975, he joined the Irish Republican Socialist Party & its paramilitary affiliate the Irish National Liberation Army. After this he was interned without trial on numerous occasions, all for crimes he did not commit. His political influence was too strong to go unnoticed, and the British solution was the same criminal act endured by any Irish man or woman who dared to speak against injustice, interment without trial.

During the 1980 Hunger Strike, Patsy was the INLA Officer Commanding in H-Block Prison. Aged just 24, he joined the 1981 Hunger Strike started by Irish patriot and hero, Bobby Sands. Patsy, Bobby, and eight other Irish martyrs died on their hunger-strike. The fast of these 10 Irish martyrs was an extremely poignant time for Irish republicans around the world, and still serve as an inspiration today.

Patsy O’Hara reacted as many young people did in those early years of “The Troubles.” After Bloody Sunday, there were many eager recruits for the IRA and other Republican groups. Many of these young men and women gave their lives in pursuit of Irish independence.

The Catholic/Nationalist community of the North had initially welcomed the British Army in 1969, as they posed as a security force who would bring peace to their community that had been under siege. Bloody Sunday erased those illusions. While most Catholics and Nationalists desired peace, their community was tired of the terror, the violence, and injustices committed against them solely for their race and religion. The Republican Movement, dormant for so long, was suddenly flush with raw recruits.

The events of Bloody Sunday, just as every other atrocity committed against the Irish by the British, were whitewashed, covered-up and “justified.”

The Widgery Tribunal was the official investigation conducted by the government to investigate the events of Bloody Sunday. The tribunal was headed by Lord Widgery, who at the time, was Chief Justice of England. Soldiers were interviewed, lied under oath, granted immunity and the Widgery Report was published in April 1972. Witnesses of the massacre were not interviewed. The soldiers were cleared of any wrongdoing and portrayed as ‘just following orders.’

Following the publication of Eyewitness Bloody Sunday by Don Mullan in 1997, in 1998 Lord Saville of Newdigate held a new inquiry into Bloody Sunday, known as the ‘Saville Inquiry.’ In this inquiry truths were revealed, truths already largely known and accepted by the Nationalist community. The inquiry revealed that not a single person in the march posed any sort of threat, to other civilians or the British military. No shots were fired at or in the direction of British soldiers. No warnings were issued prior to the British Army shooting unarmed civilians. No marcher possessed a nail or petrol bomb. In the initial inquiry, British soldiers openly lied under oath to provide justification for their actions. This included openly disobeying orders from superior officers. Colonel Wilford deliberately disobeyed Brigadier MacLellan’s orders on what actions he was authorized to engage in. The list of lies from the Widgery Report was exposed in full during the Saville Inquiry. The inquiry is published under the Principal Conclusions and Overall Assessment of the Bloody Sunday Inquiry and available online. The report is roughly the size of a chapter book and exposes the whitewashed cover-up of the Widgery Tribunal. I recommend reading it if one wants to see, step-by-step, how the events of Bloody Sunday unfolded and in-turn covered-up by those in power. 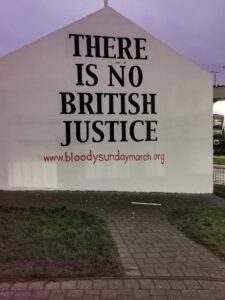 The Saville Inquiry resulted in British PM David Cameron admitting that the actions of British troops on Bloody Sunday were “unjustified and unjustifiable,” but to this day those troops have not been held accountable. Recent articles in The Gaelic American have covered the British government’s attempts at protecting those who committed murder in collusion with the British state. Showing their ambition for reconciliation 50 years on, at the writing of this article loyalists have erected Parachute Regiment flags in their territories around Derry City.

Just as the violence of Bloody Sunday supplied the IRA with recruits in Ireland, it supplied the American Irish Republican Movement, primarily through Irish Northern Aid, with drastically increased financial support. Some Irish-American politicians expressed their desire for peace and regret at the slaughter in Derry, but a committed few, among them an Italian-American Congressman Mario Biaggi, emerged to show grassroots support for the emerging Irish independence movement.

Masses to commemorate the murdered civil rights campaigners were held around the United States in 1972 and 1973. This weekend, commemorative masses are being held at: St. Patrick’s RC Church, 9511 4th Ave, Brooklyn, NY at 9:30am on January 30 (Hosted by AOH Division 12); and at the Commodore Barry Club, 6815 Emlen Street, Philadelphia, PA at 3pm on January 30 (Hosted by the Derry Society); and a demonstration in Minnesota with details available here.

Writing for RTE last week, Robert Collins noted that, in the aftermath of Bloody Sunday, Irish-Americans of the National Association for Irish Freedom staged a protest on Fifth Avenue in Manhattan, led by Brian Heron, a grandson of Irish revolutionary James Connolly. Collins also commented that the AOH/LAOH have a trip planned this year that will commemorate the events of Bloody Sunday, which “demonstrates how Bloody Sunday continues to encourage activism and resonate with the Irish-American community.”

Story Behind The Song

May their deaths not be in vain. Gone, but never forgotten.

By Patrick O’Hara. Patrick is a Buffalo native and a graduate of SUNY Buffalo.