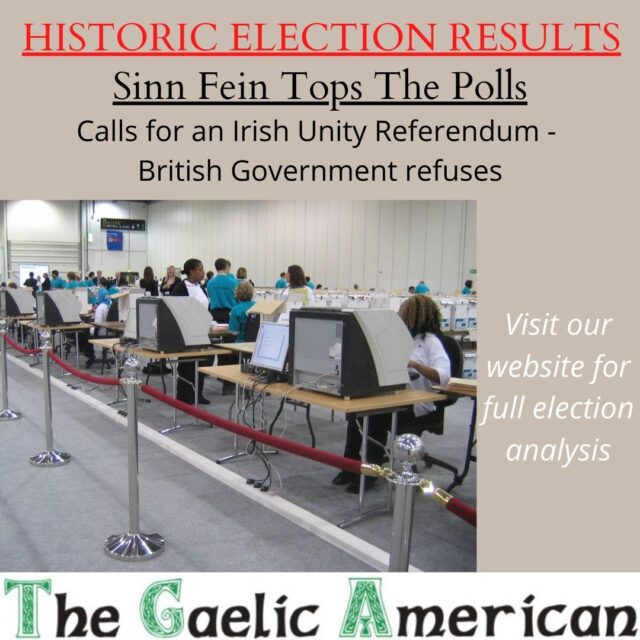 From its inception in 1920, the state of Northern Ireland was created to maintain a Unionist majority, putting an international border through the ancient Province of Ulster to keep the majority-Catholic counties of Donegal, Cavan, and Monaghan out of the new state. When the Northern Ireland Parliament at Stormont was created, the first Prime Minister James Craig declared that it was a “Protestant parliament for Protestant people.”

His words ring true no longer. After the election results were announced, the Belfast Telegraph ran the headline: “Victory for Sinn Fein stokes fears of a united Ireland.”

As of writing, the vote tally of some of the largest parties is as follows:

Irish Unity on the Horizon

Just hours after this record success, party president Mary Lou McDonald called for an Irish Unity Referendum to be put to the people within five years. The ability to have a referendum for Irish unity was granted in the Good Friday Agreement, but the power to call that referendum rests with the British Secretary of State. The GFA’s referendum provision failed to have compelling language on the British government, so the referendum will be granted when the British government thinks it is appropriate to do so.

Today, British Secretary Brandon Lewis was asked about the criteria for calling a border poll. He responded by saying “… we haven’t seen a growth in the nationalist vote and indeed the unionist vote is still larger and the number of seats held by unionist parties is larger.” He continued on to say that their main focus right now is to work out the problems with the Northern Ireland Protocol, which Unionists claim puts the North in an economic united Ireland because it leaves the state subject to European regulations, unlike the rest of post-Brexit Britain.

Unionist critics have pointed out that Sinn Fein’s position of being the largest party is due to ideological and partisan splits between the three major Unionist parties. Splits in their approaches to preserving the Union have always been a factor, but their partisan differences are now most apparent when they see the reality of a Nationalist party topping the polls. Such a defining moment has the potential to bring a realignment of Unionist politics.

The Northern Ireland Assembly was created by the Good Friday Agreement in 1998, and by its rules requires that the largest Unionist party and the largest Nationalist party work in tandem as “Joint-First Ministers.” If one ruling party refuses to sit with the other, as the DUP says they would refuse to sit with Sinn Fein in the event they were in the majority, then the Assembly cannot sit. So far, DUP President Jeffrey Donaldson has not nominated anyone from his party to sit in the Executive with Sinn Fein’s Michelle O’Neill, and has also said the Executive cannot be formed until the ongoing issues with the Northern Ireland Protocol are settled.

Last time a government was formed, the DUP had agreed going into it that there would be an Irish Language Act; then they once again reneged on letting the bill pass. Worldwide, Irish Language Act protests are to be held on May 21, including in New York City at the British Embassy – visit The Gaelic American Youtube page for more coverage.

Two facts which point to the same conclusion are worth noting – the voter turnout level was at about 62%, and the non-Unionist / non-Nationalist Alliance Party had record gains. These figures show that, regardless of political persuasion, Northern voters are fed-up of Orange v. Green politics in a state that requires joint consent to govern. The low turnout rate reflects voters who have turned apathetic, while the Alliance Party’s growth reflects voters who turn to what Americans would call a “third party.”