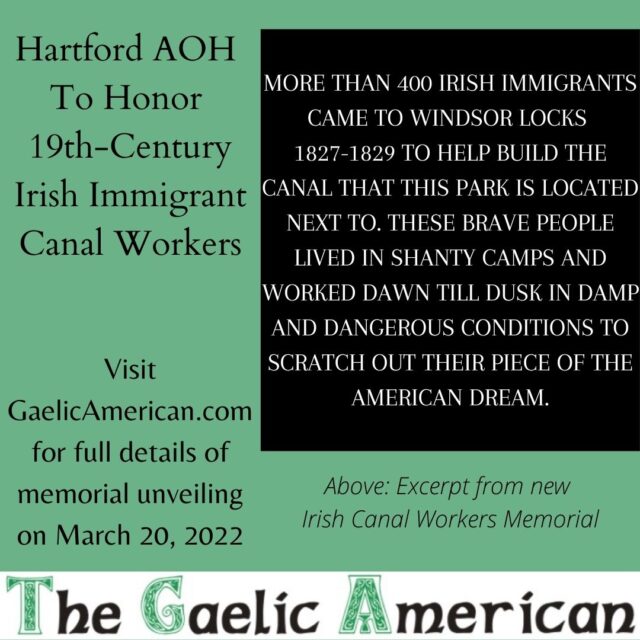 In March of 2021, the Hartford AOH held a wreath-laying ceremony at an unrecognized graveyard for 19th-century Irish canal workers, and pledged to have a memorial built by March of 2022.

The Ancient Order of Hibernians Hartford Division 2 are now pleased to announce they have successfully completed fundraising to build a monument to honor this no-longer forgotten Irish-Catholic cemetery in Windsor Locks, Connecticut.

The memorial will honor the 400 immigrant laborers who left their homeland in Ireland and came to the area between May 1827 and November 1829 to build the canal bypassing the treacherous Enfield Rapids. These laborers would have worked for low wages in dire conditions in the days before workers’ rights, and likely would have been discriminated against for their Catholic faith, as was custom in America at the time. In particular, the memorial will remember those canal workers and family members that are buried in the unmarked cemetery, located about 100 yards and across the canal from where the memorial will be placed.

The fundraising for the memorial came from gifts as large as $500 to just loose change raised at various events. Members of the Irish-American Home Society in Glastonbury, Conn., were very generous to the cause, as was Ahlstrom-Munksjo, Inc., an international company, which has a location in Windsor Locks that dates back for 250 years. A fundraising night was also held at Puerto Vallarta Restaurant in Newington, Conn., that raised money for the memorial.

The monument is being designed and constructed by K.G. Kenna Memorials, Inc., of Wethersfield, East Hartford, and Manchester, Conn.

The monument will be placed at the Windsor Locks Canal Trail State Park near the Montgomery Mills apartments, located at 25 Canal Bank Road. The formal dedication ceremony will be held on Sunday, March 20, 2022, at 1 p.m. The general public is invited to attend. To keep up to date with Hartford AOH, visit their website www.HartfordAOH.com

This accomplishment is noteworthy and testament to the resilience of the Connecticut Irish community, who have been slighted by Quinnipiac University recently in their questionable decision to close Ireland’s Great Hunger Museum.