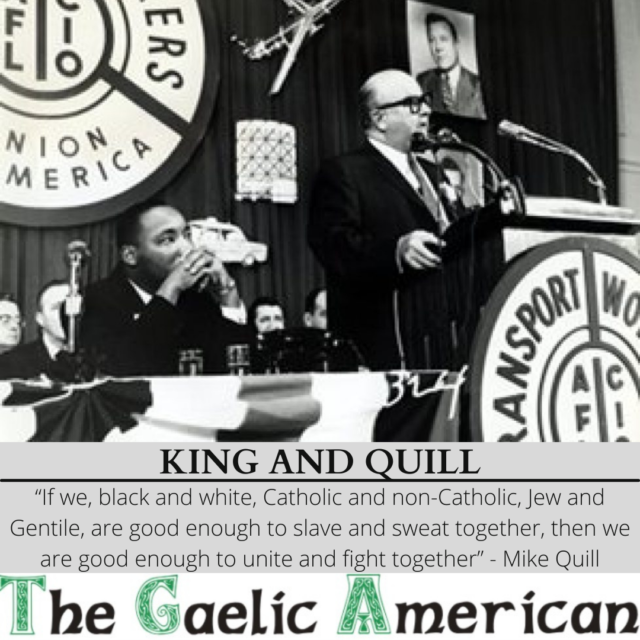 Mike Quill was born on September 18, 1905 in the outskirts of Kilgarvan, County Kerry. Coming from a republican background, during the War of Independence he served as a dispatch and a scout for the IRA Kerry Brigade, aged just 14. In the subsequent Civil War he served with the anti-Treaty IRA, and like many anti-Treaty veterans living under the new Free State regime, found that he would have to emigrate to find work.

He arrived in New York City in 1926 and took up work in the subway system, then called the Interboro Rapid Transit Company (IRT). This was long before workers’ rights – Quill was required to arrive to work four hours before his shift began, and then was required to work a 12 hour shift – this was done seven nights a week for just 33 cents/hour, with no overtime pay, sick leave, vacation time, Social Security, or pension.

Having read up on the unionizing efforts of James Connolly, the IRA leader who had organized workers in Dublin and New York, and having made many connections in different subway stations around the city, Quill and a Corkman Thomas H. O’Shea established the Transit Workers Union (TWU) to attain better rights for workers. In marked contrast to other unions at the time, the TWU included black Americans in its ranks and forced the IRT to allow them into all positions, the IRT previously allowing blacks only to work in the lesser paid occupations. In these early years before basic rights for workers Quill was a member of the Communist Party. However, as rights grew and practicality loomed, specifically in relation to the Communists’ oppositon to a fare increase but TWU demand for a raise, Quill broke with the Communist Party in 1949. The raise was won through the fair hike.

Mike Quill’s support for “liberty and justice for all” extended to all races and creeds. Speaking out against anti-Semitistism promoted by the Catholic priest Fr. Charles Coughlin, Quill stated unequivocally:

“Anti-Semitism is not the problem of the Jewish people alone. It is an American problem, a number one American problem. We all know how Hitler came into power—while he was persecuting one section of the people, other sections of the people were asleep. The merchants of hate picked their spot and picked their cause. We too must pick our cause—freedom of all peoples in a democratic America.”

Martin Luther King, Jr. noted that Quill’s support for equality predated the civil rights movement. Under his leadership, the TWU raised funds for the activists arrested for desegregation protests in the South. King was the keynote speaker at the TWU convention in 1961, where he gave a memorable speech, “Segregation must die if democracy is to live.” The speech was reprinted in pamphlet form and distributed to TWU members nationwide, all of whom were encouraged to take part in desegregation protests.

“Quill was not given to romanticism about the Irish in America. He contrasted how Irish politicians and employers ‘wept tears for where Patrick sleeps in Down’ on St. Patrick’s Day but paid starvation wages to their own employees and sent Irish-American policemen to baton strikers. However, Quill believed that there was a progressive Irish working-class tradition, exemplified by the Molly Maguires in the US and Connolly in Ireland, that could win over union members. This tradition also encompassed racial equality and opposition to bigotry. Quill was careful to remind his Irish supporters that they too had been the targets of nativist persecution… in an era in which racial discrimination was largely accepted, Quill took a much more radical position than most. His record, and that of the TWU in general, suggests that the question of Irish attitudes to race and racism in America is more complex and multi-layered than has often been assumed.”

Often cited when considering Irish-African relations in America is Bernadette Devlin’s famous choice to give the Key of the City of New York to the Black Panthers, whom she said she felt more at home with than Irish-Americans. This incident shed light on the racial tensions that existed, but regretably, also generalized the views of 20 million Irish-Americans (that number is closer to 30 million today). Such generalizations are inappropriate, so Hanley’s observation that the relationship is complex and multi-layered is more accurate.

Mike Quill died of a heart attack on January 28, 1966, three days after winning in a major labor dispute, where he had approved a TWU citywide strike that had been forbidden by a court order. “Let the judge drop dead in his black robes!” said Quill; his order to strike landing him in jail for a time while the dispute went on. Speaking after his death, Martin Luther King eulogised Quill:

Mike Quill was a fighter for decent things all his life—Irish independence, labor organization, and racial equality. He spent his life ripping the chains of bondage off his fellow-man. When the totality of a man’s life is consumed with enriching the lives of others, this is a man the ages will remember—this is a man who has passed on but who has not died. Negroes had desperately needed men like Mike Quill who fearlessly said what was true even when it offended. That is why Negroes shall miss Mike Quill.

Martin Luther King, Jr. was assassinated in Memphis, Tennessee on April 4, 1968. Like Quill, King is “a man who has passed on but who has not died.” King’s message of love over hate, and his persistince in action, were integral to the American civil rights movement. His sacrifices in the name of equality are an inspiration to all Americans over 50 years on since his death, and we remember him this Martin Luther King, Jr. Day, January 17, 2022.