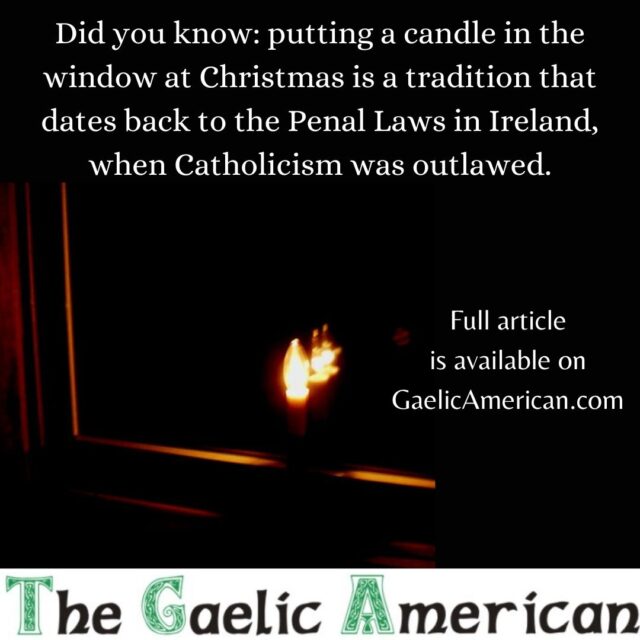 As we enter the Christmas season, it is an appropriate time to reflect on a tradition that many families take part in, though few recall its origins.

The Penal Laws were designed by the British government to treat Catholics in Ireland as second-class citizens, in a country where they made up almost 80% of the population. They had come into effect in the 1690s after King William’s rise to power. Edmund Burke, a Conservative Member of Parliament in Britain who was born to an Irish Catholic mother, described the Penal Laws as “a machine of wise and deliberate contrivance, as well fitted for the oppression, impoverishment, and degradation of a people, and the debasement of human nature itself, as ever proceeded from the perverted ingenuity of man.” Some of the laws included:

So when priests had to travel the country with a bounty on their heads, there was a subtle way to show them what houses belonged to the Catholic faith. A candle in the window was the signal – a signal which seemed innocent to the British forces, who were told that it was symbolic of welcoming Mary, Joseph, and Jesus, for whom there was no room at the inn.

Legend has it that if a home had a candle in the window, a priest would knock at the door and enter. In the home he would say mass, while the family would be instructed to keep their eyes closed or heads lowered, so as to limit their knowledge of the priest’s appearance if they were interrogated. The mass was said using makeshift items – the chalice was often collapsible, and the cross would be very small, so as not to attract any attention while travelling.

The Penal Laws began to be relaxed in the late 1700s, with Catholic Emancipation coming into effect in 1829, though their final vestiges did not disappear until the Government of Ireland Act 1920. While the Penal Laws are long gone, the Irish tradition of putting a candle in the window at Christmas continues.