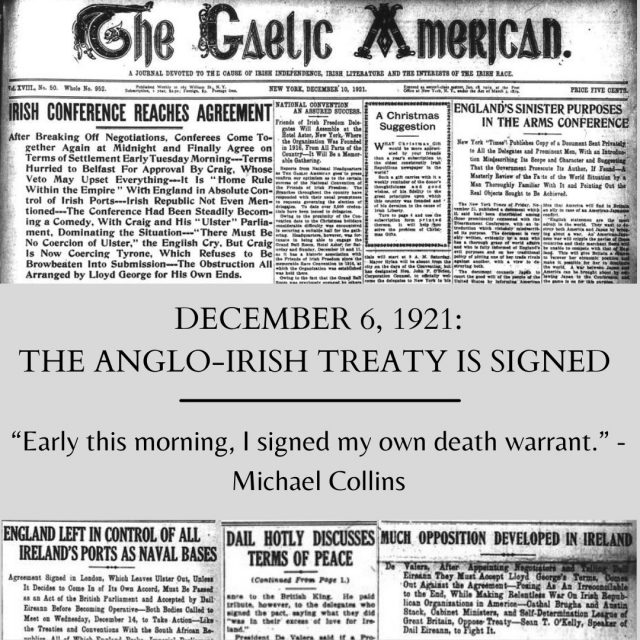 The Anglo-Irish Treaty was signed one hundred years ago today. It was signed by the British delegation, led by Prime Minister David Lloyd-George, and the Irish delegation, led by Arthur Griffith. The Treaty was signed on December 6th, 1921 after Lloyd-George insisted that “immediate and terrible war” would be waged on Ireland if the Irish delegation did not give in to the British terms. Eamon DeValera was strongly criticized for not attending the Treaty negotiations despite being the Irish Republic’s political leader – some believe this was to position himself away from talks that were doomed from the outset. DeValera became the face of the anti-Treaty movement, and Collins his pro-Treaty counterpart. The Truce in July 1921 had brought an end to official hostilities between the British and the Irish, but the Treaty in December 1921 had the result of turning Irish guns on one another, falling victim to the old British maxim, “divide and conquer.”

The Treaty provided for the following conditions:

– Crown forces would withdraw from the Free State;
– Ireland was to become a self-governing dominion of the British Empire, the same status as Australia and Canada, with the British King as Head of State.
– Members of the new Free State’s Parliament would be required to take an Oath of Allegiance to the Irish Free State and the British Crown, a portion of which read, “be faithful to His Majesty King George V, his heirs and successors by law, in virtue of the common citizenship”.
– Britain would continue to control a limited number of ports, known as the Treaty Ports, for the Royal Navy. [These were returned just prior to WWII.]

The Treaty also provided for the Northern Ireland Parliament, created in 1920, to remain a part of the United Kingdom and not the Free State. The creation of the six-county statelet was done to secure Protestant supremacy through their new government at Stormont, which lasted until 1972 when direct-rule from London returned.

The IRA members who refused to accept the Dail’s ratification of the Treaty went on to establish the anti-Treaty IRA. This led to the Irish Civil War, where the Irish Free State emerged victorious over their former comrades in the anti-Treaty IRA, after a ruthless campaign that turned families and friends on each other. In the summer of 1921 it was unlikely anyone could have predicted that, just twelve months later, IRA volunteers would be executed by an Irish Free State government, or the assassination of Michael Collins by the IRA. The political situation had changed rapidly. A few months after the assassination of Collins, anti-Treaty Erskine Childers was executed by the Free State for possession of a handgun – which had been given to him by Collins himself.

The Anglo-Irish Treaty continues to have an influence on Irish politics to this day. The two largest parties in Ireland, Fine Gael and Fianna Fail, were born out of the Civil War conflict. The Border Campaign of the 1950s and The Troubles from 1969-1998 are results of the partition of Ireland in 1921, as was the state-sponsored Orange supremacy in Northern Ireland up to modern times. Orange supremacy still permeates the psyche of Northern politics, where the Irish language is still not officially recognized. Partition alienated Ulster from the rest of Ireland, and, successfully for the British, created the image of a regional conflict rather than a national conflict for the years that followed – a perception which persists.

In America, too, opinions were divided. Up until 1921 Irish-American nationalists, though of differing opinions on various issues, were on the same page in terms of the national question – they wanted an Irish Republic. Their financial, military, and political support was crucial in this period as it had been since the Fenian movement began in New York City in 1858. However, the imposition of this treaty was a mortal blow to the unity of Irish-American nationalists, as they became divided into pro-Treaty and anti-Treaty camps. In the pages of The Gaelic American are many criticisms of the terms of the Treaty and those who signed it, but evident too is the strong dislike of Eamon DeValera, who made enemies on his American tour in 1919, notably among them being The Gaelic American Editor John Devoy and his fellow Clan na Gael leaders.

The Dubliners gave their thoughts on The Treaty fifty years ago today by singing a song called “Take It Down From The Mast”:

[Introduction, Ciaran Bourke]: “We’re out in the dressing room, and Luke Kelly mentioned to me that today is the 50th anniversary of the signing of The Treaty. So I think we should try a national anthem for that.”

[Chorus]: Take it down from the mast Irish traitors, it’s the flag we republicans claim, it can never belong to Free Staters, for they’ve brought on it nothing but shame,

Why not leave it to those who are willing, to uphold it in war and in peace, to the men who intend to do killing, until England’s tyranny is ceased,

You’ve murdered our brave Liam and Rory, you’ve slaughtered young Richard and Joe, your hands with their blood are still gorey, fulfilling the work of the foe!

Why not leave it to those who are willing, to uphold it in war and in peace, to the men who intend to do killing, until England’s tyranny is ceased.