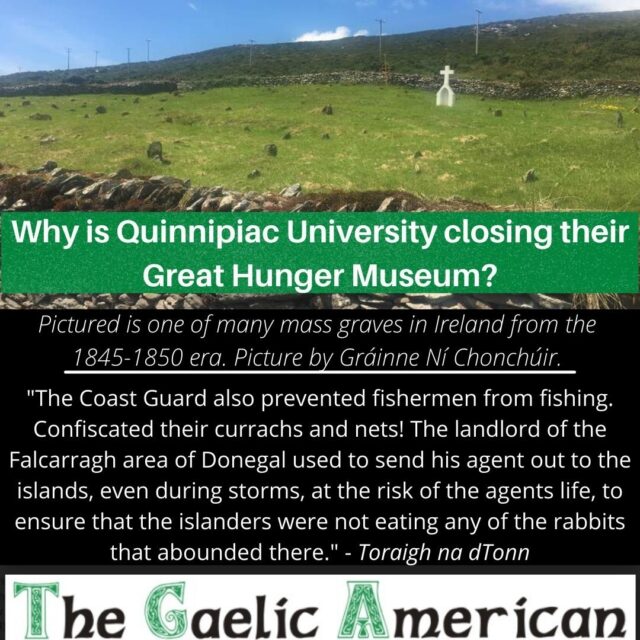 For readers new to the subject of The Great Hunger, it must be understood that in 1840s Ireland, most of the population were peasant tenant farmers, whose main source of sustenance was the potato because the British landlords made Ireland the bread-basket of their Industrial Revolution. In a famine there is, by definition, no food, but Ireland was a country with lots of food – so pointed out by Sinead O’Connor in her song, “Famine”:

Irish people were only allowed to eat potatoes

All of the other food – meat, fish, vegetables –

Was shipped out of the country under armed guard

To England while the Irish people starved.

Deprived of the right to own their own property, the Irish people’s rent and taxes were paid in the harvest they reaped. Children were imprisoned for stealing bread, while others were seen dying with green around their lips in a futile attempt to obtain nutrients from eating grass. Taxes were charged for every minor detail, such as the number of windows on a house, or the number of rooms in a house. Failure to pay these taxes resulted in eviction, which was done en masse by fellow Irishmen who took the King’s shilling and worked as police doing Britain’s dirty work in Ireland. Houses were demolished by the sheriffs, and if a family was caught living in the ruins, it was destroyed further, with any thatch remaining to be set alight to prevent any cover from the elements. It is a grim picture to paint but if a story is to be told, it must be told in full. The harsh realities that the Irish faced in the 1840’s forged a generation of rebels who suffered firsthand, and never forgave England.

An Irish rebel, O’Donovan Rossa embodied the spirit of a generation, having buried many family and friends without coffins in mass graves in his home county of Cork. Rossa later served many years in British prisons, and spent the remainder of his life agitating for Irish independence while in exile in New York. He wrote a poem “Jillen Andy” about burying his friend’s mother who died of starvation, a portion of it reads,

How oft in dreams that burial scene appears,

Through all the suns and moons of twenty years,

And oh! How short these years compared with years to come.

Some things are strongly on the mind impressed

And other faintly imaged there, it seems;

And this is why, when reason sinks to rest.

Phases of life do show and shadow forth in dreams.

And this is why in dreams I see the face

Of Jillen Andy looking in my own,

The poet-hearted man, the pillow case,

The spotted handkerchief that softened the hard stone.

Welcome these memories of scenes of youth

That nursed my hate of tyranny and wrong,

That helmed my manhood in the path of truth,

And help me now to suffer and be strong.

The Great Hunger Museum at Quinnipiac University is a testament to the lives lost, the lives changed by exile, and the total human cost of those who were denied even the smallest bit of food in the midst of so much. It is a story that transcends Ireland and is a reminder of inhumanity that exists in our world – a lesson that must be known by all generations, lest we are doomed to repeat it. One of the biggest financiers of The Great Hunger Museum was the son of a Jewish immigrant from Poland, Murray Lender. Lender was a Quinnipiac alum and co-chairman of the University’s Board of Trustees whose generosity showed what Dr. John Leahy, former school President, said was “proof of how important this story is to all immigrants.”

Financial cost is the reason given for the museum’s closure. The irony of this excuse is the ignorance of the lesson the museum was designed to remind us of – Quinnipiac is denying the right of people to see this museum, a small cost, in the midst of so much frivolous spending. Money is in the budget for Quinnipiac’s President Olian to earn almost $1 million annually, and pay her administrators astronomical amounts of money. Not to mention that after taking office, Olian began a university-funded renovation of the President’s Mansion at a cost of $1 million. It doesn’t help matters that one of the people involved in approving these financial moves is Quinnipiac’s Board of Trustees Chairman William Weldon, declared by The New York Times to be one of the “Worst C.E.O.’s of 2011”. Under Olian’s tenure, the policy of free admission ended, and there were no fundraising campaigns reported since 2019.

The Plymouth, MA Ancient Order of Hibernians Division have been active in remembering those lost in their area on a coffin ship, hosting a mass annually and this year unveiling an inscribed granite bench. Michael Schilling of this AOH Division commented on the closure of the museum, “The closure of the museum is a travesty. The story of The Great Hunger and the mass emigration of the Irish people transcends the story of the museum and is a common thread amongst a lot of people and cultures throughout history…. However, the positive I take from it is that this move has created a real coalition of people and different Irish-American organizations to come together as one voice to try to save something we should all hold dear.”

This coalition of Irish-American groups are planning a day of action for October 30th, from 1pm-5pm at the corner of Woodruff Street and Whitney Avenue in Hamden, Connecticut, featuring a street fair with live music, Irish dancing, art, and family fun activities. Parking is available at the Side Street Grille, 15 Dickerman Street. Everyone is strongly urged to attend to show their support! 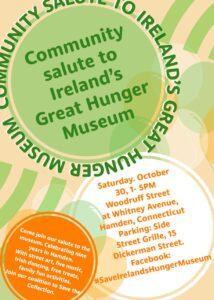 To keep up to date on this issue and to show your support for the museum, please join the Save Ireland’s Hunger Museum Facebook group.