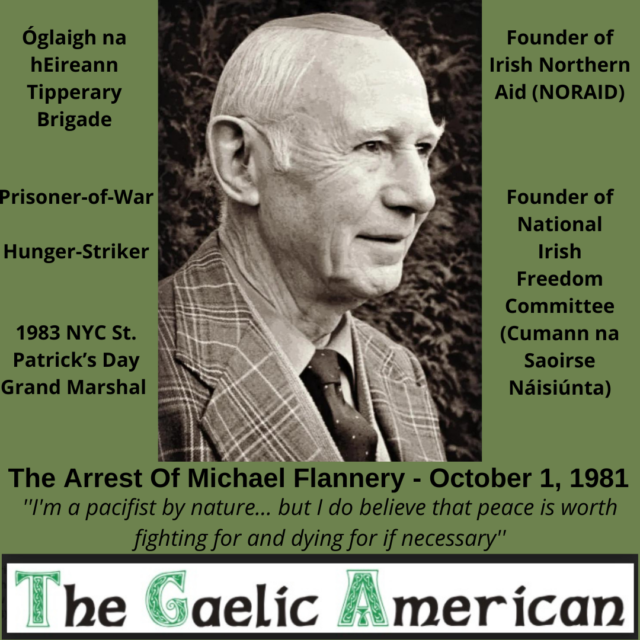 On Thursday, October 1, 1981, Michael Flannery was arrested outside of his home in Jackson Heights, Queens, NY. Michael Flannery looked like your typical old Irishman who would be enjoying his twilight years, but in reality, this 78 year old was one of the most militant Irish Republicans to be found this side of the Atlantic.

As a young man in Tipperary he enlisted in the Irish Volunteers and was an IRA Volunteer in the War of Independence. In the ensuing Civil War, he opposed the Anglo-Irish Treaty that partitioned the Irish nation, fought with the Anti-Treaty IRA, and was imprisoned by the Irish Free State. While in prison, he witnessed the execution of several of his comrades by Free State authorities, whose deaths are lamented in the song “Take It Down From The Mast”. Flannery’s experiences with the Free State government, combined with his conviction that there could be no legitimate government of Ireland until there was a 32-county republic, led him to a life-long detestation of the 26-county administration, making him an ardent believer in the policy of abstentionism.

While imprisoned, he went on hunger strike for 24 days to obtain prisoner-of-war status, which was ceded by the Free State authorities. Like many Anti-Treaty veterans, Flannery was forced to emigrate to the United States in 1927. Concerned primarily with his own survival in the Great Depression, his republican involvement waned.

The dawn of The Troubles in 1969 brought Flannery back in contact with like-minded people in New York City. In 1970 they established Irish Northern Aid, aka NORAID, ostensibly to provide financial relief to the dependents of imprisoned Irish Republicans. However, the FBI alleged that the group was providing financial assistance to the Provisional IRA for the purchase of guns, bombs, and bullets, and required the group to list the PIRA as a foreign principal in their IRS filings.

In May 1981, US District Court Judge Charles S. Haight Jr. ruled in a Justice Department suit that “The uncontroverted evidence is that [NORAID] is an agent of the IRA, providing money and services for other than relief purposes.” Amidst this controversy and opposition by NORAID, a couple weeks later four men were arrested: George Harrison, 65, a retired armed guard; Thomas Falvey, 64, a construction worker; Patrick Mullin, 45, a telephone company employee; and Daniel Gormley, 33, a stationary engineer. Mullin was head of the Flatbush, Brooklyn branch of NORAID. When he was arrested a cache of weapons was found in his garage, and when police asked what they were for, he allegedly replied “It’s a dangerous neighborhood.” Michael Flannery’s arrest was to come a few months later.

When asked about these accusations, Flannery said “I was never a gunrunner in my life… not that I didn’t give those who were successful in doing so my blessing if I could, if that helped them in any way.” He continued, “To tell you the truth, my opinion is that getting guns over to the Irish Republican Army is a very good thing. [George] Washington had to do the same thing when he was in revolt here against the same enemy.” During the trial, Michael Flannery again evoked his knowledge of the American Revolution as he lectured the federal prosecutors during his cross-examination.

The prosecution was caught off-guard when the trial began because the five defendants immediately admitted to gunrunning, but said that they were doing so through a CIA agent, George DeMeo, so it was sanctioned by the US Government. As the prosecution was telling the jury that the defendants were involved in gunrunning to the IRA for the past two years, George Harrison had his lawyer object to say he was insulted at the insinuation he was involved in gunrunning for two years – he wanted the record to show that he had been gunrunning for over 20 years and he had the records to prove it! Federal prosecutors were not prepared for such a brash defense. Such a political defense would perhaps not have been allowed in the courtroom if not for the Irish sympathies of Judge Joseph McLaughlin, himself the son of Irish immigrants from County Longford, who was educated by many Irish Jesuits at Fordham University, where he later worked as Dean of Fordham Law School.

In their closing statement, the prosecutor Mr. Kirby said “There’s no C.I.A. involvement in this at all. It’s a fabrication. They don’t have any other defense.” However, Michael Kennedy, one of seven defense attorneys, retorted in his closing statement, “It is up to the Government to prove that the C.I.A. was not involved with the defendants, not our burden to prove that it was.”

When the not guilty verdict was read pandemonium ensued among the hundreds of supporters, and George Harrison shouted “Up the Provos!” The Irish Northern Aid Committee, in a statement afterward, called the verdict “a grave embarrassment to the British [whose] pressure initiated this trial.” Expressing their frustration, one British official said, “It is a deficiency of the American justice system that the defendants could stand up in court, admit the crime, and then get away with it.”

As a tribute to Flannery, the Ancient Order of Hibernians elected him as the Grand Marshal of the 1983 NYC St. Patrick’s Day Parade. The parade delegates overwhelmingly showed the Reagan administration where the loyalties of Irish-America lay – over 400 votes for Flannery, and a dozen dissenters. Controversy ensued as some politicians chose to boycott the parade, but while at the celebrations in the legendary O’Lunney’s Bar in Times Square on March 17th, sitting in front of a banner of Bobby Sands, Flannery pointed out that that “there’s no such thing as bad publicity” and said that donations to NORAID had increased as a result of the supposed controversy. Due credit must go to his wife Pearl, who appeared next to him at the St. Patrick’s Day celebrations. She stood by Michael’s side through many hard years, and remained to him a confidant and trusted advisor on all matters.

A former parade committee officer said, “Significant numbers of Irish Americans from throughout the USA, as far as California, flew into New York to march in the 1983 New York Saint Patrick’s Day Parade, just so that they might someday be able to tell their grandchildren that they had the courage, and the honor, to march behind Mike Flannery on that day.  In my 33 years as an officer of the parade committee, it was the largest, and most orderly, parade that I can recall.” The same commenter recalled that when the 69th Regiment, traditional leaders of the parade, were lined up, they were informed that because the parade was being boycotted there was no guarantee they would receive drill pay, but because it was their unit day, it was their personal choice to march – no man defected.

In 1986 Flannery resigned from NORAID when Sinn Fein chose to take their seats in the Free State government, describing the move as “the same old departure.” The following year he founded Cumman na Saoirse Náisiúnta (National Irish Freedom Committee) to advocate his inviolable ideology of republican abstentionism.

“I’m a pacifist by nature, as I told them in the court case, but I do believe that peace is worth fighting for and dying for if necessary… History records that there’s one way of getting freedom – and that’s by violence.” – Michael Flannery (1902 – 1994)