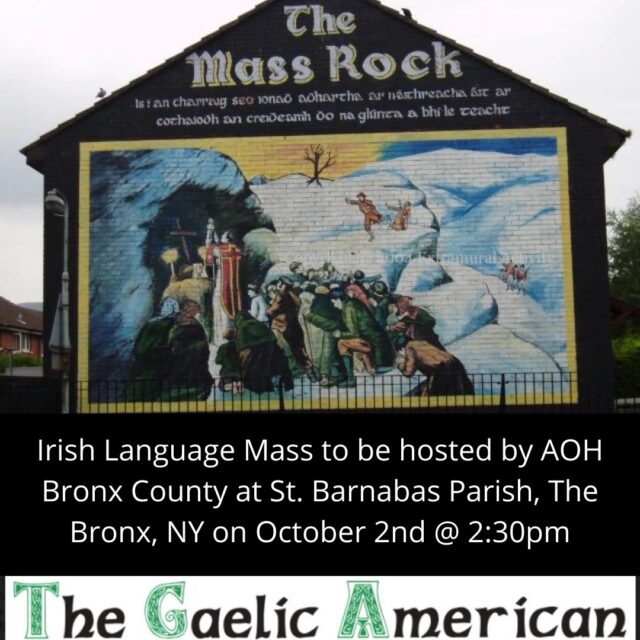 The Ancient Order of Hibernians will join with Gaelic Societies, Irish community groups and parishioners in the strongly Irish Woodlawn-McLean area to host an Irish language Mass on Saturday, October 2nd, at 2:30pm. Fr. Brendan Fitzgerald, will celebrate the Mass in Gaelic, followed by a brief installation ceremony for newly elected Bronx County officers. This year the Mass will include a special remembrance of the ten Irishmen who sacrificed their lives during the 1981 Hunger Strike, which ended forty years ago on October 3, 1981 after 214 days. It is especially appropriate to remember that part of their legacy was the rebirth of the Irish Language.

Last year, under AOH National President Danny O’Connell, the Bronx AOH Irish Language Mass became a national AOH event viewed by Hibernians across the United States and in Ireland via the St. Barnabas Facebook and AOH Youtube. More than 7,000 people viewed the Mass, many of them seeing a Gaelic Mass for the first time. You can access the mass at the following link: https://aoh.com/IrishMass

Irish-English translations of the liturgy will be made available, so that anyone can read the prayers in English as they hear the Mass said in Irish. A special musical program will be provided by the Dawn Doherty Academy of Irish Music and Sean Ruane.

Each year, the Bronx County Irish Language Mass at St. Barnabas is dedicated to all those who have kept the Irish language and culture alive. To symbolize this theme, the AOH flyer depicts a Mass Rock where Gaelic speakers gathered in secret to hear outlawed Masses said by outlawed priests in defiance of English penal laws.

The Mass will be held in the Main Church on Martha Avenue near East 241st Street, followed by a brief installation ceremony of Bronx County officers, with New York State President John Manning presiding.

“The Irish Language Mass or Gaelic Mass, at St. Barnabas has become an important annual event on the AOH national calendar. Last year more than 7,000 people viewed the Mass on Facebook or the AOH Youtube.

“This year, with the Mass coinciding with the anniversary of the end of the 1981 Hunger Strike, it is important to include a special remembrance of the ten Irishmen who died and their legacy. The late Cardinal O’Fiaich, who was Primate of all Ireland, frequently used the Mass Rock as a symbol of their plight, in advocating for them.

“The Irish language is an important and indestructible part of our Irish heritage. Measures to wipe out the Irish language began even before penal laws to wipe out the Catholic religion in Ireland. Ireland’s cherished landmarks include Mass Rocks, where Gaelic speakers risked death or imprisonment simply to worship. Even today a simple Irish Language Act is still denied to six-county nationalists.

“As an organization formed to promote Irish ideals, culture, history and national freedom, we can think of no more fitting way for AOH members to honor Irish heritage than an Irish Mass embodying all of these themes.”

“There has been a great response each year from AOH officers, Gaelic clubs, community groups and individuals who would just like to hear the Mass said in the language of our ancestors. St. Barnabas is fortunate enough to have a pastor like Fr. Fitzgerald who can say the Mass in Gaelic.”

The Mass will be held in the St. Barnabas Main Church, on Martha Avenue at East 241st Street near the Bronx River Parkway, Deegan Expressway or Metro-North Railroad, on Saturday October 2nd at 2:30pm. Everyone is welcome!”