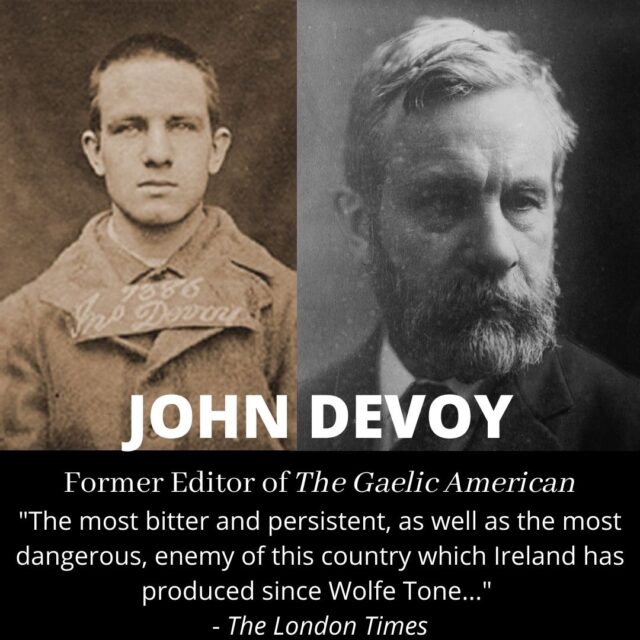 John Devoy was born on September 3, 1842 in County Kildare. His father was active in nationalist circles in Kildare and his grandfather, on his mother’s side, was a veteran of the 1798 Rising.

At the onset of the Great Hunger in 1845 the family moved to Dublin. Devoy received his education at the Christian Brothers O’Connell School on North Richmond Street, like many of the 1916 rebels in later years. After completing his education he worked as a student teacher at the Model School in Strand Street.

He attended Irish language classes where he came in contact with members of the Irish Republican Brotherhood (IRB) whose aim was to end British rule in Ireland and establish an Irish Republic. When or how he became a member of the IRB is unclear, but it can be safely assumed that it was during that period of his life.

About 1861 he traveled to France, where he joined the French Foreign Legion, ostensibly to gain military experience for the coming war with England.  After serving for a year on the Algerian front he returned to Ireland where he was tasked with organizing the IRB in the Naas area of Kildare.

In 1865, when many of the IRB leaders were arrested, James Stephens appointed Devoy as Chief Organizer of the IRB in the British Army in Ireland.  His task was to recruit Irishmen in British regiments to join the IRB and be ready to fight for Irish independence when the time came. By the time he was arrested in 1866 his efforts and that of other recruiters had given the IRB oath to as many as 15,000 men serving in British regiments.

In November of 1865 after Stephens was arrested and imprisoned in a remote wing of the heavily guarded Richmond prison in Dublin, Devoy organized and participated in rescuing Stephens, which was implemented flawlessly with the help of IRB operatives John J. Breslin and Daniel Byrne who were prison warders.

In February of 1866, the IRB Council of War, aware that the British knew of their plans from informers, met to discuss plans for an immediate insurrection.  Devoy argued passionately for immediate action, as he believed it was their best chance of success; having an IRB force of 80,000 ready to strike. Stephens, who as early as 1864 had called for an insurrection, refused to go along with this plan. Stephen’s refusal was the beginning of the end of his influence within the IRB. Colonel Thomas J. Kelly replaced him as head of the IRB in December of 1866.

In February of 1866, Devoy was arrested at Pilsworth Pub in James Street, Dublin, while attending an IRB meeting. He was charged with ‘treason’ and sentenced to fifteen years penal servitude. Having served five years of his sentence in Portland, Millbank and Chatam prisons he was released in the British government’s general amnesty of 1870.  Behind the “generosity” of the general amnesty was heavy pressure by the U.S. government to free the scores of former U.S. Army (and several Confederate Army) personnel, including generals and colonels who had gone to Ireland to participate in the uprising of 1867. The U.S. government intervention was the result of Fenian instigated pressure, primarily in letters from John Savage to president Ulysses S. Grant.

Those released were required to leave the country and not return until the term of their sentence had expired. Devoy together with Charles Uderwood O’Connell, John McClure, Jeremiah O’Donovan Rossa, and Henry Mulleda came to America.  The “Cuba Five”, named after the vessel they sailed on, arrived in New York in January of 1871 to a hero’s welcome. They were also officially honored by a resolution of the United States House of Representatives.

After settling down in the New York, Devoy worked as a journalist for the New York Herald. He also became a member of the Clan na Gael (CNAG) whose mission was to  “complete and absolute independence of Ireland from Great Britain, and the complete severance of all political connections between the two countries by unceasing preparation for armed insurrection in Ireland“.

He became the head of the New York City chapter, which would grow to be the largest in the US.  He was the most vocal advocate in seeking America’s help in achieving  “genuine democracy and authentic republicanism” for the Irish, nothing more or less what America demanded of itself.

In 1875, in one of the boldest and most imaginative exploits in Irish American history Devoy, John J. Breslin and other CNAG leaders approved a plan devised by John Boyle O’Reilly to rescue several Fenian compatriots from their prison in Fremantle, Australia. Breslin and Thomas Desmond arrived in Australia towards the end of 1875, using false identities, coordinated the ensuing escape. On April 17, 1876 six Fenian prisoners were extracted from the prison and placed aboard the whaling ship Catalpa captained by George Smith Anthony. Shortly after the escapees boarded the Catalpa it was set upon by a British naval cutter who fired a volley, demanding their surrender. In response, Captain Anthony ran up the Stars and Stripes, challenging the cutter to fire upon the American flag. The British ceased fire and turned around.

During a visit to Ireland in 1879, Devoy leading figures of the IRB and Michael Davitt, the founder of the Land League, to better align their effort to free Ireland from the ravages of British imperialism. Shortly after returning to the United States, with a better understanding of the Irish perspective, he entered into an informal agreement dubbed the  “New Departure,” with Michael Davitt and Charles Stewart Parnell to create a united front that would include a combination of physical force, agrarian agitation and constitutional nationalism. In 1880, in support of that agreement, Devoy together with Parnell and Davitt embarked on a tour of the United States to raise awareness and funds for the suffering tenant farmers and the poor in Ireland.

In conjunction with that tour, Parnell’s sisters, Fanny and Anna and other women activists, founded the Ladies Land League here in the United States to raise awareness, demonstrate solidarity and collect funds for embattled farmer tenants in Ireland. Because of their efforts, Ireland differs from Scotland, where to this day a few elite landlords control much of the country’s property, as it was in 17th-19th century Ireland.

CNAG supported many Irish nationalist projects including the Gaelic Athletic Association, the Gaelic League and the Irish Volunteers. They also worked tirelessly to promote anti-British sentiment and prevent the entry of the United States into the war on the side of Britain.

In 1914, Devoy took a leading role in promoting a lecture tour of the United States by Patrick Pearse. Pearse referred to Devoy as “the greatest of the Fenians”, and in his lectures said that the “gray-haired men” who suffered for Ireland would see a new risen generation, eluding to the coming Easter Rising. CNAG, under Devoy’s’ leadership, was the chief source of funds and arms for the 1916 Easter Rising.

In 1903 he launched The Gaelic American newspaper, through which he chartered Irish-American opinion through the turbulent Easter Rising and War of Independence period. Throughout his life’s private work he helped organize two seminal rebellions, while his public work with The Gaelic American directly led to the Irish-American nationalism which has been inherited by succeeding generations.

John Devoy passed away on September 29, 1928 in Atlantic City, New Jersey. His body was returned to Ireland for burial in Glasnevin Cemetery in Dublin.