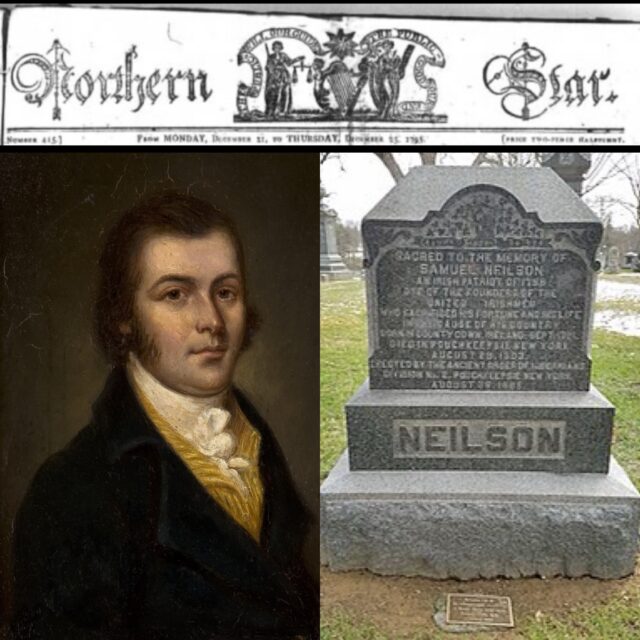 Samuel Neilson was born on September 17, 1761 in Ballyroney, Co. Down, one of thirteen children born to Alexander Neilson, a Presbyterian minister, and his wife, Agnes. He received a liberal education locally, where he was exposed to Scottish Enlightenment thinking. At 16 years old, he started work as an apprentice with his older brother who ran a woolen drapery business in Belfast.

In 1785 he married Anne Bryson with whom he had five children, four girls and a boy. After their marriage Samuel and Anne set up their own business known locally as “The Irish Woolen Warehouse”. The business was very successful and by 1792, when he became involved in politics, he had amassed a considerable fortune.

His first got involved in politics by becoming a member of the reformist Volunteer movement, which was set up to bring about parliamentary reform. Influenced by the French Revolution,  Thomas Paine’s “Rights of Man” and Wolfe Tone’s “Argument on Behalf of the Catholics of Ireland”, he approached Henry Joy McCracken, a fellow Presbyterian, in Belfast with the idea of establishing an organization based on religious equality for the promotion of Catholic Emancipation and Parliamentary Reform. The idea was adopted by McCracken and other Presbyterian minded reformers. In October of 1791 the nine Presbyterian reformers invited Wolfe Tone and Thomas Russell, both Anglicans, to a meeting in Belfast to discuss the idea of establishing such an organization. Emanating from that meeting the Society of United Irishmen was established with Tone as its titular head. The participants adopted following resolutions as their guiding principles:

That the weight of English influence in the Government of this country is so great as to require a cordial union among all the people of Ireland, to  maintain that balance which is essential to the preservation of our liberties and the extension of our commerce,

That the sole constitutional mode by which this influence can be opposed is by a complete and radical reform of the people in Parliament,

That no reform is just which does not include Irishmen of every religious persuasion.

In January 1792 Neilson became editor of the Northern Star, the organ of the Society of United Irishmen in the north whose adage was the radical reform of parliamentary representation and the repeal of all penal laws against Catholics. He remained its editor, despite enduring numerous prosecutions and actions for libel until his arrest in September 1796 when the newspapers offices were ransacked by the military, and he, Russell, and several others were arrested and imprisoned in Newgate Prison in Dublin, and later transferred to Kilmainham Jail.

The newspaper remained in operation until its printing presses were destroyed by the Monaghan Militia in 1797.

Along with other prisoners held without charge Neilson was released in February 1798 on grounds of bad health primarily resulting from the treatment he received during his imprisonment. Conditions of his release forbade him from joining any treasonable committee or engage in seditious activities. Resentful of his treatment while imprisoned and scornful of the British imposed conditions he immediately joined Lord Edward Fitzgerald and other leaders of the Society of United Irishmen in preparing for a rising.

All along the British were kept abreast of the Society’s plans by traitors planted within the leadership of the Society. On March 12, 1798, the British, acting on information providing by the traitor, Thomas Reynolds, arrested Oliver Bond and fourteen other delegates assembled in Bond’s house in Dublin. Neilson and Lord Edward Fitzgerald were the only figures of national importance still at liberty. They decided to press ahead with the rebellion as soon as possible and settled on May 23 as the date for the rebellion to begin.

However, Fitzgerald’s hiding place in Dublin was raided on May 18 by the military on information provided by Francis Higgins, the most infamous traitor of his time. During the raid Fitzgerald was critically wounded while resisting capture. Neilson, the only top tier leader still at liberty, decided to try and rescue Fitzgerald from Newgate Prison where he was held.

On May 22, the eve of the planned Rising, Neilson was arrested outside Newgate Prison, the “Irish Bastille”, while scouting the surroundings in preparation for an attack on the prison which would have begun the Rising and liberated Fitzgerald and the other imprisoned leaders. Unfortunately, he was well known to the prison authorities and his presence in the neighborhood aroused suspicion.

On June the 26th, bills of indictment were sent up for high treason against Neilson and five other Society leaders. An account in the Life of Grattan describes the scene in court to which Neilson was brought heavily ironed. “When brought into court the noise of his entrance was like the march of men in irons. He was called on to plead, and asked if he had anything to say; he replied in a stentorian voice, ‘No! I have been robbed of everything—I could not fee counsel; my property—everything has been taken from me,’ and he turned away. But he came again to the front of the dock, and said, ‘For myself I have nothing to say; / scorn your power, and despise that authority that it shall ever be my pride to have opposed; but I may say—not that I value it—why am I kept with these weighty irons on me, so heavy that three ordinary men could scarcely carry them? Is it your law that I should be placed in irons, and in such irons?”

After the trial Neilson was imprisoned in Kilmainham Jail with eighty or so other prisoners. To avoid execution the prisoners agreed to provide information to the English with respect to their involvement in the Rising with the understanding that the names of others would not be given.  After interrogating the prisoners the English concluded that the prisoners had little to add to what they already knew from their network of spies. In the latter half of 1798 the prisoners held in Kilmainham were released except for twenty of the leaders including Neilson who were sent to Fort George in Scotland where they were confined until the Treaty of Amiens in 1802.

Their transfer to Fort George was due to the refusal of the United States government to grant Neilson and the others prisoners permission to emigrate to the U.S. a desire expressed by them and agreed to by the English. The decision to deny them entry was orchestrated by Rufus King, the United States ambassador to the Court of St. James during the John Adams administration.

The British treaty with the French marked the end of years of imprisonment that Neilson and the other prisoners had endured. They were released on condition that they never return to Ireland, so Neilson was deported to the Netherlands.

After his release from Fort George he wrote a letter to his friend and fellow United Irishman, Archbald Hamilton Rowan, in which he described his feelings and thoughts regarding his efforts on behalf of Irish freedom with the following words;  “Neither the eight years’ hardship I have endured, the total destruction of my property, the forlorn state of my wife and children, the momentary failure of our national exertions, nor the still more distressing usurpation in France, have abated my ardour in the cause of my country and of general liberty. You and I, my dear friend, will pass away, but truth will remain.”

Prior to his departure for the United States he returned to Ireland in defiance of the British imposed exile, to see his beloved wife and children and bid farewell to his friends and compatriots.

Samuel Neilson arrived in the United States in December of 1802 and settled in Poughkeepsie, New York.  He had little time to enjoy his liberty  before his sudden death on August 29, 1803 of Yellow Fever, or possibly a stroke. He was not idle during his short life in America as he had just completed plans to start a new evening newspaper in this town of Poughkeepsie and also had plans in the works to establish a version of the Society of United Irishmen here in the United States. 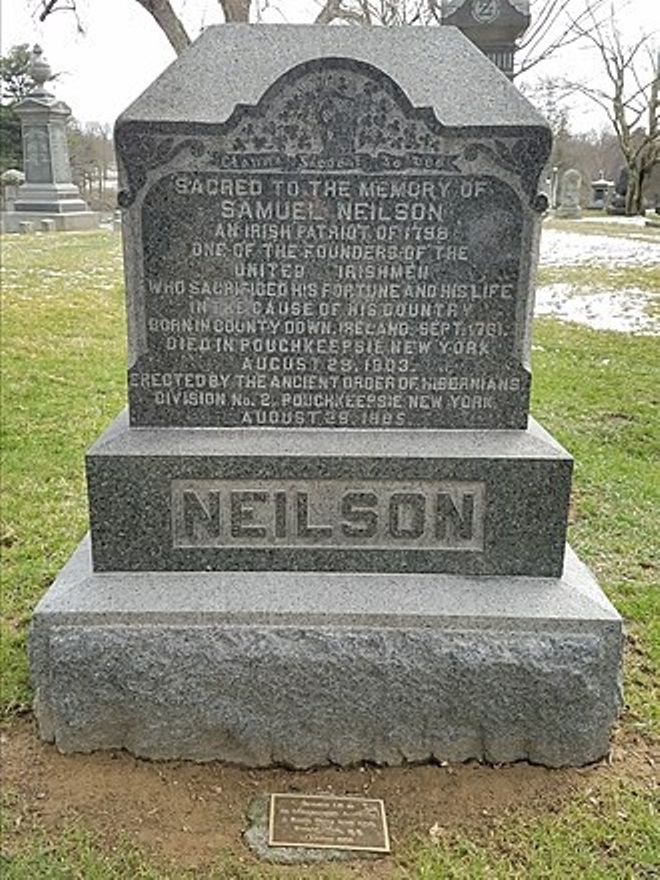 Since his death, he has been moved to three different cemeteries before coming to rest in the Poughkeepsie Rural Cemetery in 1880. He had been lying in an unmarked grave until this was discovered by Dr. Thomas Addis Emmet, a grandson of one of Neilson’s co-conspirators. The local AOH division provided a headstone for him in 1905.