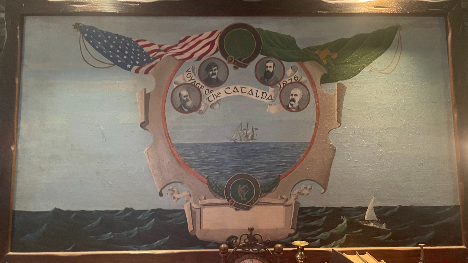 This article was written by George McLaughlin, who reflects on the Catalpa Rescue and relates how he has tracked down the graves of the Catalpa Six.

Searching For The Fenian Dead

Years ago, with a small group of avid immigrant high school students, Irish-American activists and community historians, I began looking back at some of the Fenian dead, trying to make out their faces, their lives. After another familiar activist told me, “There’s a Fenian buried near you. You might want to find out more about him,” I learned his name was James McNally Wilson, buried in St. Mary’s in Pawtucket. Wilson began to “follow” me, and I learned that he was buried with his wife, Lucy, in the same plot with Frank and Mary Byrne. Byrne was an aide to Charles Stewart Parnell and secretary of the Irish Home Rule League and the Irish National Land League, who helped the native Irish regain the land that was controlled by foreign landlords. Eventually, he and his wife fled to America, after being suspected of revolutionary activity with the notorious “Invincibles,” including the assassination of Lord Cavendish and his aide, the Under-Secretary for Ireland T.H. Burke, in Dublin’s Phoenix Park.

Thus began a journey for me, and now, the Fenian Memorial Committee of America, which has lasted many years and will continue until the dead Irish revolutionaries, including Fenians buried in America — like Wilson — who pursue us, finally let us rest. Who were the Fenians anyway? What forces and events formed them? The Fenian organization, the Irish Republican Brotherhood — headed by James Stephens — was formed on St. Patrick’s Day, 1858 by exiled rebels who had taken part in a short-lived and unsuccessful rising in 1848, yet another effort towards Irish freedom in response to An Gorta Mor, the Irish Famine or the English Negligent Genocidal Loss, depending on who interprets it. At least one million died and 1.5 million immigrated. There was no doubt how the Fenians interpreted it. Stephens’s comrade, John O’Mahony, went to America and set up the apparatus for money and arms to support the IRB in Ireland. During and after yet another failed rebellion in 1866 — and another betrayal — the Catalpa Six, all military Fenians who had served in the British Army, were sentenced to death for treason, a sentence later commuted to penal servitude for life — what some have called a “a fate worse than death” — in the Crown’s prison in Fremantle, Western Australia.

To The End Of The Earth

Nineteenth century Western Australia could be called the moon of that time. The prison had the bush on one side and the ocean on the other. The prisoners aged quickly. Eventually, the prisoners found a friend in Catholic priest Patrick McCabe of Anaghary, Gowna, County Cavan, who attended All Hallows College in Ireland and was ordained as a missionary priest to Australia. He smuggled a series of letters to comrades in America. The most famous, called “Voice from the Tomb” was written by Wilson. Wilson feared that he and the other military Fenians were forgotten and would perish in this no man’s land. The Fenians in America, like John Boyle O’Reilly — who was in Boston, having escaped Fremantle earlier with the crucial assistance of Father Patrick McCabe — were deeply moved by Wilson’s pleas and set about investigating a possible rescue.

The Plea is Answered

After a series of mishaps and misconnections, but with the help of scores of secret Fenian helpers, and, yet again, Fr. Patrick McCabe, the rescue took place on April 18, 1876. Although an attempt was made by the British authorities to commandeer the Catalpa, Captain Anthony raised the Stars and Stripes and warned them that they would be firing on the American nation if attacked. The warning worked as the British turned their ship around, and the rescue was successful.

On August 19, 1876, after a harrowing voyage, the Catalpa arrived in New York, and then went to New Bedford. The Catalpa Six – Robert Cranston (Tyrone), Thomas Darragh (Wicklow), Michael Harrington (Cork), Thomas Hassett (Cork),  Martin Hogan (Limerick) and  James McNally Wilson (Newry–Armagh and Down) – eventually distributed themselves, with the help of supporters, throughout different states, including Rhode Island, Pennsylvania, Illinois and New York. None would ever return to Ireland. Most of them lived out the remainder of their lives quietly in the Irish immigrant communities of New York, Philadelphia, Chicago, and Rhode Island. When Eamon De Valera visited America in 1919, he paid a visit to James McNally Wilson, who allegedly received an IRA pension until he died the following year. 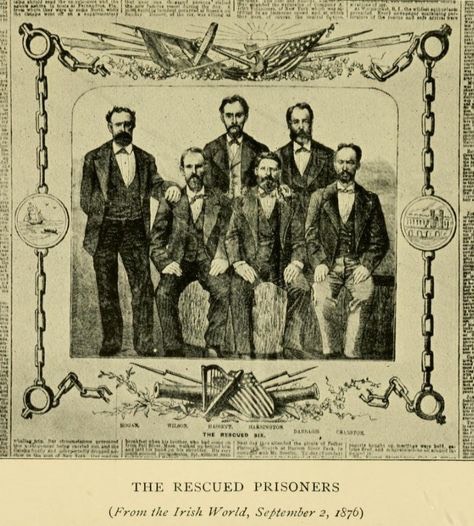 And what of Fr. Patrick McCabe? Eventually, Father McCabe made arrangements to flee Australia. There is no mention of his whereabouts until he reappears in Minnesota, coincidentally my wife’s place of birth, and is granted a position as a rural parish priest by Bishop John Ireland from Kilkenny. Father McCabe eventually became pastor of Saint Mary’s Church in Waseca County, Minnesota, a mainly Irish mission church. We found two examples of the love that locals had for him — a great Celtic cross over his grave and a stained-glass window dedicated to Fr. McCabe’s memory, which was saved when St Mary’s Church was razed and later installed nearby in Sacred Heart Church — coincidentally, where my wife, Annie, was baptized and attended mass.

Our committee placed a commemorative stone at Father McCabe’s grave on May 19, 2018, and headstones or markers at the graves of Catalpa escapees James McNally Wilson, Robert Cranston, Thomas Darragh and Martin Hogan previously. We are currently raising funds to erect gravestones for their comrades Michael Harrington and Thomas Hassett who lie in unmarked graves in Calvary Cemetery in Queens, N.Y. To contribute and stay up to date with our campaign, please visit fenianmca.org

A graveside centenary commemoration of James McNally Wilson’s death followed by a fundraising social will be taking place at the Galway Pub in Pawtucket, RI, on Saturday, November 6, 2021. The Gaelic American will provide more details closer to the time.