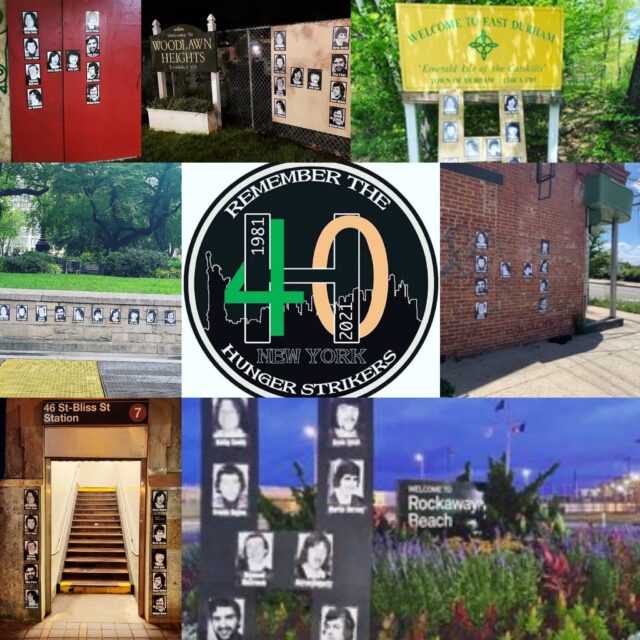 The summer of 2021 marks 40 years since the death of 10 brave young men on hunger strike in the H-Block Prison. Throughout this past summer, an anonymous group has been posting memorials to the hunger strikers across the greater New York area. Shared through the Instagram page @WNYWI (When New York Was Irish), the group have put tributes in Astoria, Sunnyside, Red Hook, Rockaway, Riverdale, Woodlawn, Union Square, and East Durham. Each post is accompanied by a brief description of how these Irish-American neighborhoods have been connected with the struggle for Irish independence. The tributes they have posted and the WNYWI page are both a great resource for the Irish American community because they educate and inform our community while also maintaining relevance to the community in which the tributes have been posted.

The tributes to the hunger strikers are a testament to the Irish prisoners of war’s courageous actions, indomitable spirit, and steadfast refusal to accept Margaret Thatchers criminalization policy, and shows that their sacrifice is proudly remembered by Ireland and her allies the world over.
Since launching on July 4, The Gaelic American has covered the anniversaries of Joe McDonnell, Martin Hurson, Kevin Lynch, Kieran Doherty, and Thomas McElwee. August 21, 2021 will mark 40 years since the death of the 10th and final hunger striker to die in 1981, Michael Devine. On Friday August 20th there will be a 40th anniversary commemorative event to mark this monumental occasion.
Tyrone’s most famous rebel Band ‘The Irish Brigade’ will take the stage at the Wild Goose on Roosevelt avenue. Beginning at 9:30, expect to hear many of the iconic songs of the Hunger Strike era such as; ‘Read the Roll of Honor’; Hughes Lives On Forever’; ‘ Farewell to Bellaghy’; and many more.
Guest speaker is former Noraid director of publicity and current AOH National Freedom For All Ireland Chair Martin Galvin.
$20 a ticket, available from the Wild Goose Bar 5420. Roosevelt Avenue, Woodside, Queens 11377.