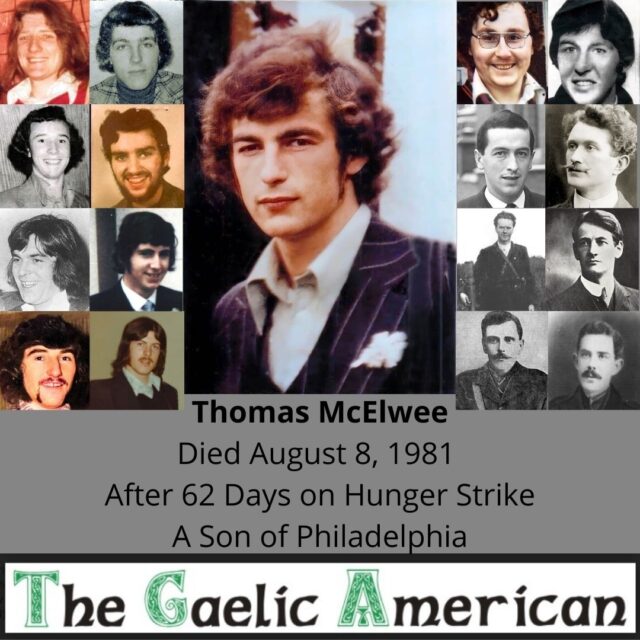 Thomas McElwee was born in 1957 in Bellaghy, a village in the hills of South Derry. He was the first son born to Alice and Jim McElwee, one of twelve children. Jim McElwee was from that area, but Alice McElwee [née Hughes] was born in Philadelphia in 1925. Her father Joseph Hughes was a veteran of the IRA during the 1919-1921 campaign. Her happy childhood in America was changed by the economic crash which brought about the Great Depression. Her family had lost their source of income and was reduced to desperate conditions like so many Americans at the time. When she was seven years old her parents took the family back to Ireland, settling in Portglenone, County Antrim. Her brother James Hughes later returned to Pennsylvania, and settled in Montgomery County.

Near where the McElwee family lived, the British Army took over a quarry and used it as a base when The Troubles began. As a young boy Thomas McElwee and his brother Benedict watched these foreign soldiers’ movements in their countryside, and resolved that this could not be tolerated. At a young age they both joined the republican movement, working in an independent unit alongside their cousin Francis Hughes and other local Bellaghy men such as Dominic McGlinchey and Ian Milne.

The unit led by Hughes were notorious for their fearless actions, including daylight gun and bomb attacks on police and army stations. For a while they operated as an independent unit before amalgamating with the Provisional IRA. In October 1976 the McElwee brothers took part in a bombing blitz of economic targets in the loyalist stronghold of Ballymena. One of the explosives they were using exploded prematurely while they were in a vehicle, causing various levels of injuries to almost everyone inside. Thomas, who was just 18, lost an eye in the explosion. All of the unit were arrested, including Thomas’s girlfriend, Dolores O’Neill. Benedict was only 17 at the time.

The brothers were held on remand in Crumlin Road Gaol before being sentenced to life in H-Block Prison. They both joined the blanket protest and endured brutal conditions alongside their fellow republican prisoners. When Bobby Sands began his hunger strike to regain political status for the republican prisoners on March 1, 1981, Francis Hughes was to join the death fast two weeks later, ultimately perishing on May 12 after 59 days of starvation. Tom McElwee joined the hunger strike on June 8.

Throughout the incarceration of her sons, Alice McElwee made sure that they never went without a weekly visit, even if it meant travelling all the way from Bellaghy twice a week. Her daughters later noted that she also never hesitated to smuggle tobacco into the prison for her sons. In June of 1981 Alice travelled the United States to rally support for the cause. She addressed the AOH New York State Convention in Binghamton and spoke with supporters at Penn’s Landing, Philadelphia. At a Philadelphia rally to support the hunger strikers, a sign was held that said “Thomas Gerard McElwee – Son of East Germantown”. She found much support among the ordinary people of the United States, as well as with their local representatives, but her appeals to the Reagan administration fell on deaf ears. When Thomas died on August 8, his sister Mary called their uncle James Hughes in Philadelphia to tell them the news. James’s wife Mary recalled that Alice was too distraught to speak to them over the phone. She also said of Alice’s trip to Philadelphia to rally support for the anti-H-Block movement, “She didn’t talk much about [Thomas and Francis], and she always appeared strong. She said they were determined and they were dying for a cause they believed in. But I could see that she was torn apart inside… I hope to God that she is able to handle this.” The resilience of Alice McElwee was the subject of a documentary called Máthair by TG4 in 2020. Alice McElwee died in February 2021.

The day after McElwee’s death thousands lined the streets of Philadelphia and New York to mourn McElwee and to show their support for the anti-H-Block campaign. At the funeral in Bellaghy, John Davey of Sinn Fein chaired the graveside ceremony – he was to die in a loyalist assassination attack eight years later. Thomas McElwee was buried in Bellaghy beside his cousin and comrade, the second hunger striker to die in 1981, Francis Hughes. McElwee’s death is remembered in the song Farewell to Bellaghy, written by Gerry Ó Glacain of The Irish Brigade.