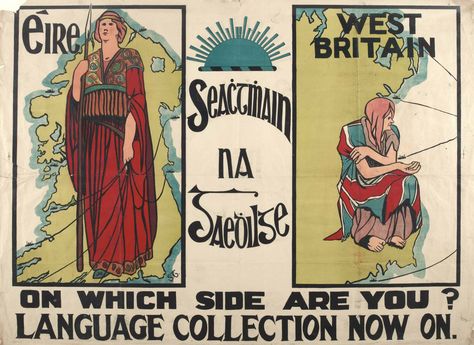 Does Ireland exist? Is there such a country as Ireland? This question occurs to me more and more as time goes by.

There is certainly a large island to the west of Britain which is denoted by that name. The greater part of it is occupied by a theoretically sovereign state with its own flag, postage stamps, and international sports teams.

But is this really enough to make a country? What distinguishes the Irish from the rest of the world, at this stage? If we took away the bilingual street signs, what evidence would there be of Ireland possessing a separate culture or way of life?

Was this what all the fuss was about? Were the United Irishmen, Fenians, Young Irelanders, Irish Volunteers, and the writers of Our Boys magazine striving towards the Ireland of Aldi and Lidl, Burger King and Starbucks, rappers on Grafton Street, and Black Friday sales?

If pride in ourselves and gratitude to our forebears isn’t enough for us to cultivate some kind of national distinctiveness, surely we should have the decency to put on a show for the tourists? Tens of thousands of Irish-Americans come here every year, full of starry-eyed eagerness for the “old country”. Diaspora Irish from all over the world make the same pilgrimage. They expect gentlemanly fist-fights in pubs, fiery red-headed colleens, and twinkly-eyed hunks in Aran sweaters sitting on stone walls dispensing folksy wisdom. They get hipsters in sushi bars and blue-haired social justice warriors instead. What a let-down it must be for them!

How can we make Ireland somewhere again?

Well, here is one proposal: it’s time for us to start speaking Gaelish. On the model of Spanglish, it would be a cross between Gaelic and English, even if that meant speaking English with a peppering of Gaelic.

When the Irish state was established a hundred years ago, one of the central aspirations of its founders was to revive the Irish language as the language of everyday life. This didn’t happen, to put it mildly. Within a few decades, it became obvious that the revival of the Irish language was not really a top priority for any political party, nor indeed for the public. Bread-and-butter issues soon replaced the lofty cultural and social goals that had fuelled the Easter Rising and War of Independence. Even the practice of politicians starting out their speeches in Gaelic before inevitably switching to English was soon retired, for the most part.

Irish is a headache to learn, for most people. There are people who pick up the intricacies of the modh conníolach and the tuiseal ginideach like a pocket picks up lint. For many of us, however, they remain lifelong mysteries.

And even when we have enough Irish to risk a conversation, there are other obstacles. Suddenly launching into a stream of Gaelic can cause distress and consternation to those around you. I’m aware of this reaction in myself. Although I fully support the revival of the Irish language (in principle) my immediate reaction to hearing Irish spoken is a strong desire to run away. (In his book Lapsed Agnostic, John Waters— who raised his daughter to be Irish-speaking— mentions a similar dread of encountering Irish language speakers.) Besides, even if you power through this awkwardness, it can be hard to find someone in your daily routine who can and wants to speak in the first national language.

Of course, it’s almost unthinkable to speak Irish in a group, other than a group designed for that purpose. Try it at a dinner party— taking off all your clothes might be less dramatic, depending on your circles.

So perhaps the answer is to start smuggling Gaelic words into the English we use, to make Hiberno-English ever more Hiberno.

Why not? Most people in Ireland have a smattering of Irish. They know what a cupán tae and a cáca milis is. They can tell their toin from their uileann. Indeed, it’s not unknown for Irish people to throw in a Gaelic phrase such as “dún an doras” spontaneously.

Why not do it more often? Our twenty-first century is (they tell us) all about cultural fusion and cross-fertilization. Why does the traffic, in this regard, always have to be in one direction? Why can’t the native pervade the foreign, for once?

The best part of creating an Irish-English creole is that it would be a linguistic Wild West. The grammarians and lexicographers would have no authority here. Nobody would chastise you for a missed séimhú or an adjective on the wrong side of the noun. Inevitably, if the thing prospered to any extent, the scholars would come along and start noting patterns and unspoken rules. But that would be a small price to pay.

Pat: I see that amadán Varadkar was on the telefís again telling us all to get our instealladh.

Mike: And why not? We all have a dualgais to get the instealladh.

Pat: I’ll give you a buille san phus if you don’t dún do bhéal pronto.

Although my tongue might have occasionally strayed towards my cheek in the writing of this article, I don’t think it’s a completely ridiculous proposal. The revival of Irish is a Herculean task, and it’s obvious that this generation is not going to succeed at it. But cultivating Gaelish might make us sound a little less like the latest episode of Coronation Street or The Oprah Winfrey Show.

This article first appeared on The Burkean. Written by Maolsheachlann Ó Ceallaigh. Reproduced with thanks to The Burkean Staff and the author.

Views expressed here are solely those of the author. We invite readers to comment their views below.