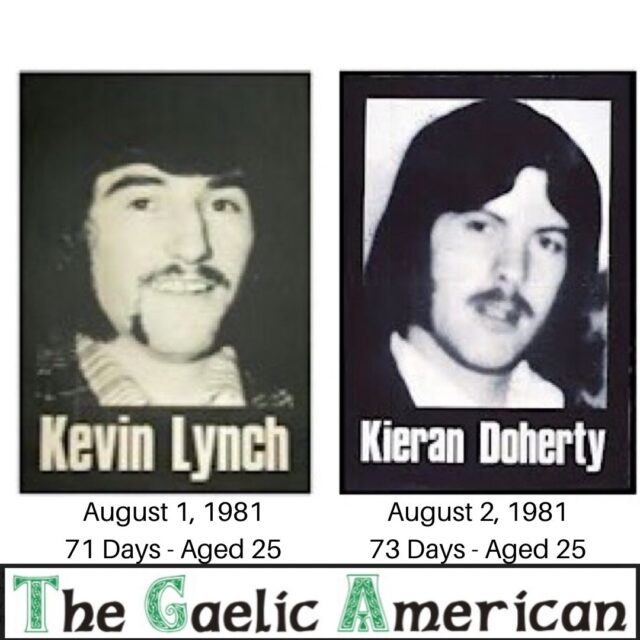 Kevin Lynch was born in Park, north County Derry, on May 25, 1956. Growing up in Dungiven, he was known as a keen athlete and famously captained the under-16 Derry hurling team to winning the All-Ireland hurling championship in 1972.

Influenced by the times he was growing up in, having been harassed and beaten by British soldiers as a young man, Kevin became a Volunteer in the INLA. He was arrested in December 1976 and was charged with stealing firearms, taking part in a punishment shooting, and conspiracy to disarm members of the security forces.

After receiving a 10-year sentence Kevin was sent to the H-Block Prison, where he joined the blanket protest. Prison life was an every day struggle that was made even harder by the brutality of the prison warders. After four years “on the blanket”, Lynch joined the hunger strike on May 23, 1981, replacing his INLA comrade Patsy O’Hara, who died on May 21. While on hunger strike Lynch stood unsuccessfully for election for the Waterford constituency, receiving nearly 4,000 votes. The strong showings in elections during the strike were especially important because of the British argument that the prisoners were criminals and not political prisoners.

Kevin Lynch died on August 1, 1981, aged 25, after 71 days on hunger strike. On the road to the funeral, the RUC and British Army halted traffic and shut down bus routes, but this did not deter the many mourners that came to pay their respects. At the funeral, with an INLA color guard and thousands of supporters in attendance, a statement read on behalf of the INLA Army Council stated, “Kevin Lynch has made the greatest sacrifice, and he has done it in the face of the repressive machinery of British imperialism and in the wake of the greatest gesture of defiance against those who control the prisons and those who rule and ravage our country.”

Kevin’s life is celebrated in the song “The Harp Without the Crown”. 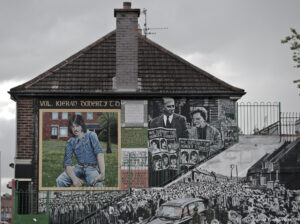 Kieran Doherty was born in the Andersonstown section of Belfast on October 16, 1955. He grew up in this staunchly republican area, and came of age at the dawn of The Troubles. Like Kevin Lynch, he was an athlete of Gaelic sports, winning a Minor level championship with St. Theresa’s GAC in 1971.

Kieran was arrested while partaking in a bombing mission in August 1976, and subsequently found guilty in a juryless court for firearms, explosives, and hijacking offenses, for which he was sentenced to 18 years. When he arrived at the H-Block Prison he immediately joined the blanket protest, and like all of his republican comrades in the prison he was subjected to countless beatings and harassment at the hands of the prison warders – in one instance, in October 1978, Kieran sustained multiple injuries for refusing to consent to an oral and anal search. . Kieran joined the hunger strike to regain political status on May 22, 1981, ultimately dying on August 2, 1981, after 73 days without food. While he was on hunger strike he was elected as a TD for the Cavan-Monaghan constituency, receiving over 9,000 votes.

Kieran’s sacrifice is remembered in the song “Kieran’s Song”.

Americans turned out in droves throughout the summer of 1981 to protest the British intransigence towards the hunger strikers. The protests took place nationwide, and were largely organized by Irish Northern Aid (aka NORAID). As Kevin Lynch and Kieran Doherty inched towards death with no concessions forthcoming from the British government, NORAID organized demonstrations to coincide with the royal wedding of Charles and Diana on July 29. In Chicago, 3,000 people turned out to hear addresses by Oliver Hughes (brother of Francis Hughes), Martin Galvin (NORAID), and Neil Blaney (Independent Fianna Fail). In New York, July 20th marked the 100th consecutive day of protest outside the British Embassy, on a day when Irish-Americans were joined also by 500 Greek-Americans protesting the presence of Turkish troops in Cyprus – placards were held saying “Ireland and Cyprus – Sisters in Tragedy, Sisters in Victory”. In total, 4,000 protesters were in attendance including the FDNY Emerald Society, bolstered by the presence of their Department Commissioner Hynes and Deputy Commissioner Mancuso.