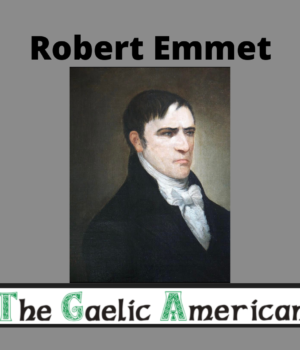 Robert Emmet was born in Dublin to Dr. Robert Emmet and his wife, Elizabeth Mason. He was one of several sons named Robert born to his parents, with all those that came before him having died in infancy. Dr. Emmet was a member of the Protestant Ascendancy; related to the British royalty and holding prestigious positions in many societies, he was the Surgeon General of Ireland. Dr. Emmet’s older sons were Temple and Thomas Addis. Temple was a prolific lawyer, with his legal talents recalled by many of his contemporaries. While Temple was practicing law, Thomas Addis was studying medicine in Edinburgh, where he was president of five different student societies.

In their home, Dr. Emmet instilled the republican principles of the American Revolution in his children. Through this education, they looked at all their countrymen as equals, at a time when the anti-Catholic Penal Laws were still in effect. At university, Temple, Thomas Addis, and Robert were further exposed to the republican theories of the Enlightenment.  Robert was well known for his debating skills at Trinity College, and his classmate Thomas Moore (later a famous poet) recalled that men “of advanced standing and reputation for oratory, came to attend our debates, expressly for the purpose of answering [Robert] Emmet.”

Thomas Addis Emmet was a member of the Directory of the Society of United Irishmen, a group organized in 1791 to unite Catholics, Protestants, and Dissenters under the common name of Irishman. The society started as a constitutional reform-minded group, but its associations with revolutionary France forced it underground. Thomas Addis Emmet was arrested with much of the leadership in the lead up to rebellion, in March 1798, and one month later his younger brother Robert Emmet was expelled from Trinity College for having been a part of a student society of United Irishmen.

Thomas Addis Emmet was imprisoned at Fort George in Scotland until 1802 with his family and co-conspirators. Conditions were hard – at one point Emmet organized setting fire to the jail in order to obtain better treatment, as the frost was especially harsh in the cells during the winter. Following his release, he reunited with his brother Robert in France on August 7, 1802. There Robert explained his plans to reorganize the remnants of the United Irish movement, and his brother agreed to work on procuring French aid has had been given in 1798.

Robert Emmet collaborated with several 1798 veterans including Michael Dwyer, who since 1798 had maintained a roaming group of rebels through the Wicklow Mountains. Dwyer’s cousin, Anne Devlin, served as a housemaid to Emmet, and served a crucial role in helping the organization of Emmet’s conspiracy. Travelling around the country, Emmet found that the revolutionary spirits of the 1790’s, particularly among the Presbyterians, had largely vanished, and thus found great difficulty in organizing.

Emmet’s arms depot, located on Thomas Street in Dublin, was the site of an explosion in the early hours of July 23, 1803. Fearing that this was going to expose the whole conspiracy, Emmet opted to go ahead with a rebellion immediately, without coordination with other parts of the country and without French aid. It amounted to about 100 men in Dublin City involved in sporadic skirmishes throughout the town. One of the men inadvertently killed by the rebels was Lord Kilwarden, the Chief Justice of Ireland, a cousin of Wolfe Tone who had helped him escape prosecution a few years prior to 1798.

The fact that the rebellion had to go ahead in such haste provided an opportunity for the British media to dismiss Emmet’s genius and ambitious plans for revolution as a “drunken riot”. Until recently, many historians also overlooked the level of planning and organization that Emmet had put into his conspiracy, prior to it having been exposed.

While some of his co-conspirators chose to flee immediately, Emmet chose to go see his girlfriend Sarah Curran in Rathfarnham, outside Dublin City, and it was there that he was captured. Nearby at the house Emmet had been staying in, Anne Devlin was tortured by British soldiers but still refused to give them any information.

The guilty verdict on the charge of high treason against Robert Emmet was a foregone conclusion, but as an added insurance his lawyer was paid off by the government. Emmet was offered the chance to speak at the trial, and it was this “Speech from the Dock” which has secured his memory for generations – many versions of the speech exist, but the most well known lines were his conclusion, beseeching people to let his memory rest in obscurity, “Until my country has taken her place among the nations of the earth, then, and not till then, let my epitaph be written.”

The following day he was hanged and beheaded at the age of 25. A mystery persists to this day as to the exact location of his gravesite, but as William Butler Yates said, “By denying Emmet a grave, they have made all of Ireland his tomb.”

Emmet’s Speech from the Dock was so powerful and well-spoken that it has been read and memorized by some of history’s most famous people, including Abraham Lincoln and Winston Churchill. His fame led to several American cities being named after him, and in later years many GAA clubs were dedicated to his memory.

After learning the fate of his brother, Thomas Addis Emmet took his family to the United States, where he and his children continued to be active in Irish republican circles, with a physical connection to the subsequent republican movements of 1848, 1867, and 1916. They also found new struggles to advocate for, including abolition, civil rights, and anti-imperialism.

In America the Emmets were eager to prove their loyalty to their adoptive republic – when war broke out with the British in 1812, Thomas Addis Emmet’s sons Robert and Christopher joined the armed forces. Christopher was highly praised for his bravery fighting on the high seas, despite the fact that he was only 14 years old at the time. Robert served in a calvary unit, and went on to become a judge in the state of New York. While fundraising for the Young Irelanders in 1848 he told a crowd of 5,000 people in Jersey City, “If Ireland’s independence cannot be won without bloodshed, then let there be blood.” Like his father, he became involved with abolitionism. During the Civil War, two of Judge Robert Emmet’s grandsons were to die after serving alongside Thomas Francis Meagher in the Irish Brigade. One hundred years later, Richard S. Emmet marched alongside Martin Luther King, Jr. from Selma to Montgomery in a protest against segregation, carrying a legacy his ancestors would have been proud of.

In Ireland, Emmet’s memory was kept alive throughout the Young Ireland and Fenian movements. His death was considered “Christ-like in its perfection” by 1916 Easter Rising leader, Padraic Pearse, who was to suffer a similar fate.