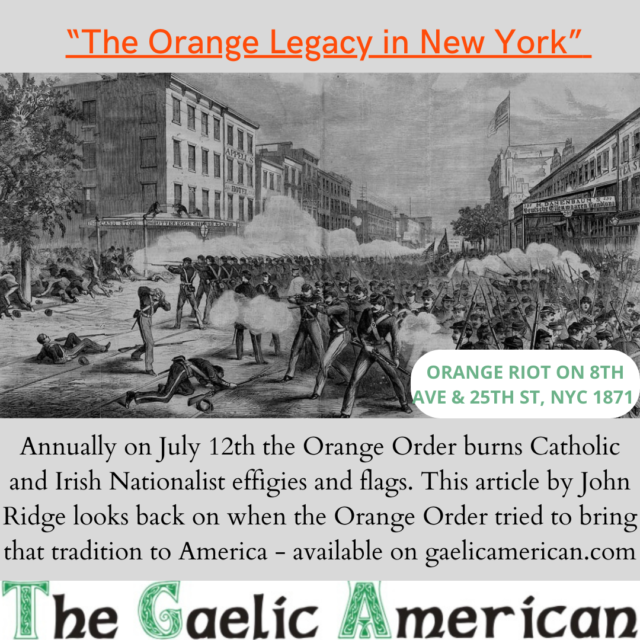 In the 1790s, rural County Armagh was a hotbed of Protestant and Catholic sectarianism. Friction between the two groups culminated in a fierce pitched battle at the Diamond, a country crossroads near the village of Loughgall in 1795. Immediately afterward, the victorious Protestants came together to pledge themselves in secret fraternity and formed what became known as the Orange Order. The Orange Order was then (and remains so in the present day) sworn to maintain the Protestant position in Ireland and to keep Ireland linked with Britain. Immigrants from Ireland have brought the order to many countries around the world.

Presence of the Order in New York

Although the Orange Order was present in New York as early as 1824, the organization had become dormant by the time of the Civil War.

[ Editor’s note: Recorded in The Memoir of Thomas Addis and Robert Emmet, on the 12th of July, 1824, a procession of Orangemen marched through the city playing provocative tunes such as “Croppies Lie Down.” They marched into Greenwich Village, which was at that time almost exclusively Irish Catholic, having been motivated to live together for their own personal safety. “The Orangemen marched deliberately to this village for the purpose of irritating the inhabitants, and succeeded so well that they received a most humiliating thrashing…”

The police arrested about one hundred Irishmen on the charge of “rioting and disturbing the peace.” When it came time for their day in court, Thomas Addis Emmet, an exiled United Irishman who was working as a lawyer in New York, heard of the case and abandoned his commitment for the day, opting instead to defend his countrymen. In the memoir written by his grandson and notable historian, Dr. Thomas Addis Emmet, it was recorded that “… the judge, on hearing how matters stood, forthwith discharged the prisoners without even a reprimand being deemed necessary. The Irishmen of Greenwich collected money and had a silver pitcher given to Emmet with their personal thanks as an inscription. ]

In 1868 its rebirth officially came about when a handful of members conducted a small parade through the streets of New York. The Irish-American, a New York weekly co-published by Catholic Irishman Patrick Lynch and Protestant Irishman William L. Cole, laughed off the Orange procession – By most of those who saw the motley gathering at all, it was taken to be a procession of very odd fellows, going to the funeral of a “dear departed.” And they were not very wrong; for this insane attempt to give embodiment to bigotry in its worst form in this free Republic has buried Orangeism under a heap of ridicule it will never shake off.

The tiny procession of 1868, however, was followed by two more parades in 1869 and 1870 at which there was increasing violence. In 1871 a tug of war raged between New York’s mayor Oakey Hall and New York’s governor John Hoffman over whether the Orange march should be allowed, but in the end the governor won and permission was given to go ahead. On July 12, a small number of Orangemen, escorted by a large military escort, proceeded to make their way down Eighth Avenue. Suddenly, part of the escorting state militia fired on the crowd in the vicinity of Twenty-Ninth Street. When the smoke cleared there were fifty-four dead – almost entirely bystanders.

In most of the initial reports of the daily press the Orange Order was extolled editorially as a brave organization standing up for its rights, while the forces aligned against the Orangemen – the Irish societies, like the Ancient Order of Hibernians, were demonized as an alien force organized to destroy American freedom. An investigation by the New York Department of Health determined many of those killed to be rioters with dubious evidence, or complete lack thereof. In the case of J. Riley, a laborer of Sixtieth Street and First Avenue, Riley was judged to be a rioter by the circumstance that he “came home from work in forenoon; changed his clothes and left again around noon.” The 1872 12th of July march required a 500-man police escort, with the cost to the taxpayer contributing to less sympathy for the Orangemen. It passed off without noticeable violence as compared to the two previous years, with the Brooklyn Eagle commenting:

After such a tame Twelfth of July as yesterday we may hope for a cessation of the annual attempts to renew old squabbles in a newland, and to stir up strife among people who have not even a hereditary interest in those squabbles with which this scurvy society of Orangemen have so long disgraced and insulted us.

When only two hundred members turned out on July 12, 1873, formal parades were discontinued until 1890.

An annual Orangemen’s excursion up the Hudson on or about July 12 was started in 1874. The boat made landings in Manhattan as well as Brooklyn, often in Greenpoint, which had a large north of Ireland population of both Protestants and Catholics. On these excursions the more extreme Orange anti-Catholic “party songs” were saved until the boat left the pier. Upwards of fifteen-hundred members and their families joined these cruises, but on occasion an air of fear surrounded the trip. In 1879 when the Irish revolutionary O’Donovan Rossa was discovered on board, it was rumored he had “sanguinary purposes” in mind until it was discovered that he was legitimately employed as a newspaper reporter.

The excursion boat in 1886 passed Blackwell’s Island (now Roosevelt’s Island) where the “lunatics” working the fields responded with friendly waves until the women began waving their orange handkerchiefs. The inmates promptly began aiming their hoes, apparently wishing they were rifles. This event seemed to heighten the anxiety on board about a conspiracy and a “rumor that some Roman Catholics were at the excursion. In less than a minute revolvers were revealed, and the wildest excitement followed for a few minutes. The hunt after the doomed Roman Catholics was unsuccessful, as there was none.”

The Order and the American Protective Association

In 1890, to mark the two-hundredth anniversary of the Battle of the Boyne, the Orange Order resumed formal parades on July 12. Beginning at Madison and Thirty-Fourth Street in Manhattan, seven lodges from Manhattan and the Bronx, four from Philadelphia, two from Brooklyn and one from Yonkers paraded, making a total of fifteen-hundred men. About a thousand members paraded on average, but as many as five thousand gathered later at picnic grounds like Jones’ Wood in Manhattan or Ridgewood Park in Brooklyn.

The Orange Order faced a period of bad publicity in the mid-1890s largely as a result of its connection with the A.P.A. (American Protective Association), an anti-Catholic, anti-immigrant society that forbid its members to vote for or do business with a Catholic. Mayor Schieran of Brooklyn, certainly no ally of the Irish Catholics, banned the order’s Brooklyn parade in 1894 by refusing to allow a permit. Citing the explosive conditions in the country because of labor agitation and unemployment, Brooklyn officials argued that the sectarianism of the Orangemen and their alter ego, the A.P.A., might set off a dangerous riot.

The Order in Later Times

Since the 1871 riot, the Orangemen had managed to attract few to their ranks but Canadians and north of Ireland immigrants. In 1886 it was reported that New York Orangemen were organizing support for Ulster, but it was not until Home Rule for Ireland became a real possibility that the order became more outspoken. At their Manhattan picnic in 1912, a resolution was passed expressing “sincere hope that the Home Rule bill will be rejected.”

Faced with the deaths of many of its leading members, the order took on a less public role in the 1920s. The last known parade occurred in 1958, when about a thousand members marched about twenty-two blocks from a national convention held at the Hotel McAlpin on West Thirty-Third Street to the Fifth Avenue Presbyterian Church. One lodge remains to the present day in New York.

[ Editor’s note: This year’s 12th of July commemorations in the north of Ireland appear to have gone off without incident, barring the usual demonstrations of bigotry. As an example of the tolerance the loyalist community demonstrates, the Editor of the Unionist Voice, Jamie Bryson, posted a picture of a bonfire burning Irish tricolors with the caption stating that it was a “good family atmosphere”, and another picture of the port of Larne (where the UVF’s guns were smuggled in 1914), declaring that “The famous harbour (of 1914 fame) echoes with the old tunes of defiance as true today as it was then.” DUP leader Jeffrey Donaldson visited bonfires but condemned the burning of flags. ]