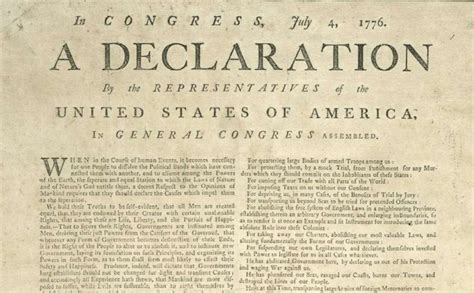 “We hold these truths to be self-evident, that all men are created equal, that they are endowed by their Creator with certain unalienable Rights, that among these are Life, Liberty and the pursuit of Happiness.–That to secure these rights, Governments are instituted among Men, deriving their just powers from the consent of the governed, –That whenever any Form of Government becomes destructive of these ends, it is the Right of the People to alter or to abolish it, and to institute new Government, laying its foundation on such principles and organizing its powers in such form, as to them shall seem most likely to effect their Safety and Happiness.”

The Declaration of Independence put into words the reasoning and the aspirations of the American revolutionaries – to break the connection with the “mother country”, to make the Thirteen Colonies into sovereign independent states, and establish a new form of government. The American Revolution inspired people across the world, and because of the personal connections many colonists had with Ireland, this inspiration was to alter the course of Irish history. In his book The Irish Issue in its American Aspect (1917), Shane Leslie commented that “American independence had as great an effect on Ireland as the Russian revolution has had on the modern world at large. It left Ireland dreamily ambitious, eternally unsettled, and enamoured of the sunset of the West…. Catholic and Protestant, ‘Ulstermen and Irishmen, the sons of Uladh and Erinn’, as the old writers divided Irishmen, were one in hailing American independence.”

During the course of the American Revolution, British soldiers had been sent to the colonies in such droves that Ireland was left defenseless, the result of this being that Ireland, led by the famous orator Henry Grattan, assembled a force called the “Irish Volunteers” to protect Ireland from potential invaders. Using his leadership of the Volunteers as a bully pulpit, he succeeded in obtaining for the first time under British rule a Dublin Parliament, referred to as “Grattan’s Parliament.” The new parliament was sectarian, corrupt, and submissive to the London Parliament, but its creation was symbolic in that it showed that the threat of Irish violence was a persuading tool when looking for concessions from England. Nine years later, Wolfe Tone was to use the remaining groups of Irish Volunteers as a building block for assembling the United Irishmen.

While the United Irishmen Rebellion of 1798 did not have a declaration of independence, the subsequent 1803 Rebellion led by Robert Emmet did. Differing from the American declaration, the 1803 Proclamation was addressed to the people it sought to represent, rather than the government it opposed. This was also to be a theme of the 1867 and 1916 declarations. The American declaration mostly addressed grievances with the King and Parliament, which the 1803 Proclamation did as well, but 1803 did so with more of an emphasis on mustering the people to action. This point can be explained by the fact that, by July 4, 1776, war had been waged for over a year already, as opposed to the 1803 proclamation, whose publication and circulation was to signal the beginning of the rebellion. This point is also shared by the 1867 and 1916 Proclamations.

The 1867 Declaration differs from the other declarations because it had a more international emphasis than the others. The internationalism of the document is found from its opening line, “The Irish People to the World”, to its closing paragraph, “Republicans of the entire world, our cause is your cause. Our enemy is your enemy. Let your hearts be with us. As for you, workmen of England, it is not only your hearts we wish, but your arms. Remember the starvation and degradation brought to your firesides by the oppression of labour. Remember the past, look well to the future, and avenge yourselves by giving liberty to your children in the coming struggle for human freedom. Herewith we proclaim the Irish Republic.” However, it was similar to the other declarations in its recounting of grievances, its wish to abolish monarchy, and its desire to establish a republican form of government.

From its opening line, “Irishmen and Irishwomen”, the 1916 Proclamation is an extremely forward thinking document. Other notable lines include “The Republic guarantees religious and civil liberty, equal rights and equal opportunities for all its citizens…”, and its call for “cherishing all the children of the nation equally…”. The 1916 Proclamation, being the most recent manifestation of an Irish declaration of independence, emphasized the point that it was not proclaiming a new nation, but re-establishing a fundamental right for the Irish people to claim their right to sovereignty. All seven of its signatories were executed in the weeks following the Easter Rising.

All of these declarations of independence contained the common thread of republican thought espoused throughout the Enlightenment. There is evidence of the same democratic principles in Ireland’s declarations of independence, but Ireland’s major difference from America is that they have more than one declaration – the American Revolution was conclusive in overthrowing foreign rule, whereas Ireland’s struggle against imperialism was passed on from one generation to the next. The greatest similarity of these documents is that they were all written for the betterment of their fellow countrymen by people who were considered treasonous by the British Crown. Penalties for these patriots of 1776, 1798, 1803, 1867, and 1916 would have included imprisonment, exile, or death, for the crime of wanting an independent democratic republic. As inheritors of the American republic, it should be our patriotic duty to read the Declaration of Independence.