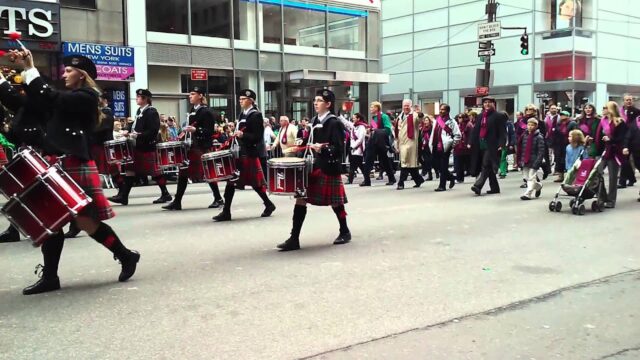 Tartan Talk is a bi-weekly column on The Gaelic American where we cover news or stories from the piping community. This week, Eric McDonald gives us a brief history lesson on the origins of the bagpipes in the United States.

The bagpipes are a storied tradition that was brought by Irish and Scottish immigrants coming to the land of opportunity. The tradition of bagpipes in America dates all the way back to the mid 1700s in cities across the Thirteen Colonies. These early immigrants found themselves in a completely new world with their music and dancing traditions as the only thing they could bring with them to remind them of home. When Highland Games started being held in the United States in the 1800s, the first games had brass bands playing Scottish tunes because bagpipers were scarce in quantity in every city. It was not until the late 1800s when Highland Games with a few bagpipers was seen as a huge event.

These individual players decided that they wanted to learn from each other, and bagpiping societies were soon formed. The first of these was the Philadelphia Caledonian Club which in 1875 had about only six members playing. Next came Albany, establishing a band with twelve players (way to one up the competition!) Then there was the First Regiment of the Royal Scots Pipe Band in Chicago which was established in 1893 as the first regularly organized pipe and drum band in the United States.

Now since there was more than one band in America, how would people know who the best band was? The answer to that was bagpipe competitions, which at that time occurred at only a few Highland Games, with cash prizes going to the winners of each category of playing. There were four categories to play in: pibrochs, marches, reels, and strathspeys. Each of these sets of tunes were distinct in sound and style, and are still the standards for competitions today.

The standard of playing in these early competitions was very basic because all players learned second-hand and had not learned from very experienced players. But that changed when Robert Ireland (a fitting name!) established the New York Highland Pipers’ Association in 1882. This man was a member of the famed 93rd Highlanders Pipe Band and even won the prestigious Braemar Highland Gathering in Scotland – this would be the modern day equivalent of Michael Jordan establishing a basketball team in Europe. This superstar leader also brought a strong supply chain of chanters and reeds from Scotland, something that none of the competition had at the time. Jump to the early 1900s and there are more pipers than ever. By this point almost all Highland Games had an established solo piping competition and new pipe bands were popping up all over the place. Some of these bands were the Pittsburgh Bagpipe Society (1898), Massachusetts Highland Dress Association (1903), Gordon Highlanders of Buffalo (1904), International Pipe Band of Detroit and Windsor (1905), New York Scottish Highlanders (1907), Scottish Dress Association of Rhode Island (1908). Always looking for new recruits, the Yonkers Kilty Band posted members at the docks to greet new immigrants that had any baggage that resembled a pipe box.

More bands were established after World War One, mostly in the suburbs of major northern cities. Bands were established in Manchester, Waterbury, Worcester, Bridgeport, Hartford, and Schenectady (most of which are still around today). By the end of the 1930s there were over thirty bands across the nation that kept the Celtic spirit alive for generations to come.