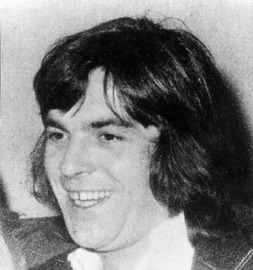 Joseph McDonnell was born and raised on Slate Street in the Lower Falls section of Belfast. He got married to his wife Goretti in 1970, and moved to Lenadoon in the Upper Falls. At this location his house was subject to multiple sectarian attacks. It wasn’t until being falsely arrested in the combined British military and police operation labeled “Demetrius” that he made the decision to join the Provisional Irish Republican Army upon release. After that, he would be arrested for the last time. This was due to a shootout between the PIRA and RUC/British military forces, after which
Joseph McDonnell, Bobby Sands, Sean Lavery, and Seamus Finucane were all arrested. The conditions of the arrest were controversial; a claim being made that one pistol was connected to all four of them as well as the events of that day. They were all dealt a sentence of 14 years each for possession of a firearm, however, none of them recognized or accepted the jurisdiction of the court. To them, their cause was just, and the governing body illegitimate.

Up until March 1, 1976, Irish republican prisoners had de facto political status, called “Special Category Status” because they were committing “special” (political) crimes, were tried in
“special” (juryless) courts, and were put in “special” (high-security) prisons. The British policy of criminalization of Irish republicanism began in 1976 by removing the political status and
instead choosing to treat republican prisoners as ordinary criminals. They were told to wear prison uniforms, which would have criminalized not just the contemporary republican
movement, but thereby criminalize the cause carried by generations of Irish republicans. Kieran Nugent was the first IRA Volunteer to be arrested under the new laws – he famously refused to wear the criminal uniform, telling the prison wardens they would have to nail it to his back. Instead he wore a blanket, and so began the “blanket protest.” Prison beatings were common, and in response to prisoners being beaten savagely on their way to empty their chamber pots, they instead smeared their excrement on the cell walls, beginning the “dirty protest.” The inhumane conditions were compared to the sewer pipes of Calcutta by Cardinal O’Fiach, and garnered worldwide attention. Conditions were desperate, and so began the hunger strike of 1980 to restore all the prison rights that had been lost.

The goals of the hunger strikes were the “Five Demands”:
1. the right not to wear a prison uniform;
2. the right not to do prison work;
3. the right of free association with other prisoners, and to organize educational and
recreational pursuits;
4. the right to one visit, one letter and one parcel per week;
5. full restoration of remission lost through the protest.

Joseph McDonnell found himself agreeing with the goals of the hunger strikes of 1980, but did not take part in that endeavor. Rather, he found himself fully prepared for the intensity of the
1981 hunger strikes. There he found himself aligned in the same strike as Bobby Sands, and in the same fashion, while imprisoned he stood for election in the Sligo-Leitrim constituency, only
narrowly missing in a closely watched and fought election. Bobby Sands narrowly won the Fermanagh-South Tyrone election, becoming the youngest MP in Britain at the time. Though elected to British Parliament, Margaret Thatcher refused to recognize their political status, and Bobby Sands was to die after 66 days on hunger strike. The strategy of the hunger
strikers during this period was to stagger the starts of the strike periods. Instead of all dying around the same short period of time, they would wait until the next one began getting close to
death, then triggering the next hunger striker to begin his faithful mission. For the 1981 hunger strike fatalities, 10 men lasted between 46-73 days from start to finish, with no physical food or
nutrition – the strike in total lasted 214 days with some strikers coming off the strike for medical and family reasons. This strategy caused much more intense public support and extreme attention on the world stage from media outlets that were willing to carry and spread this harrowing story across the continents.

Joseph McDonnell died on July 8, 1981, after 61 days on hunger strike, and was buried in Milltown Cemetery surrounded by his comrades and buried directly next to Bobby Sands. He left behind his wife and
two children, at the early age of 29 years old. At his funeral his election representative spoke extremely highly of him, including a quote by Padraig Pearse, “He may seem the fool who has
given his all, by the wise men of the world; but it was the apparent fools who changed the course of Irish history.”
He is commemorated in the Irish Martyrs Memorial in Sydney as well as countless art works and private pieces dedicated to his memory alongside the hunger strikers who fought and died with him. Most poignantly, he has a song in his namesake by the Wolfe Tones, in which they mention his early and late life, the intense political and prejudiced atmosphere surrounding the time
period, and lastly the intensity, passion, and justification of his belief that he was not a criminal.

By Micheál Ó Colm. Micheál is an alumnus of Iona College and serves as Chief Financial Officer of The Gaelic American.

The Candle & The Wreath